Brandon McClanahan: site of his passage from this world 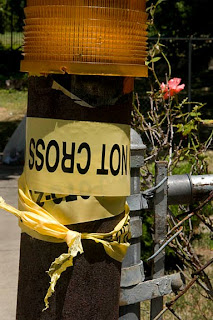 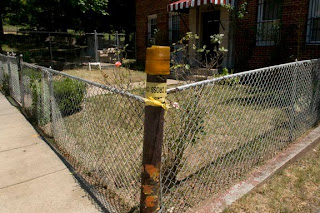 From DC police reports:
On Saturday, June 26, 2010, at approximately 1:43 am, Fifth District officers and DC Fire and Emergency Medical Services personnel responded to the vicinity of the 1800 block of M Street NE, Washington, DC, for the report of a shooting. The officers located an adult male shooting victim in an alley near the 1200 block of 19th Street, NE. The victim was determined to have no signs of life and was later officially pronounced dead on the scene.
The decedent has been identified as Brandon McClanahan, 24, of Temple Hills, Maryland.
Posted by Lloyd at 7:59 AM

As the mother of his kids u can only imagine how hard it is for me. Me and my kids struggle everyday. I can say that I was truly blessed for my kids to have a strong father that would give and protect them from the cruel things and people in this wprld. Since this happened my life has not been the same. They don't know what they took away from me... If only I could bring him back just to see him smile or hear him laugh or just to give him the biggest hug. I would do or give anything just to have him back... I miss u so much and I love u too death

Hello Brandon I'm monique the mother-n-law of ur lil sister kimberly! I want to say that although we never met I knew that if we had I wouldve loved u just as much as I love kim and the twins! So with that being said u r our angel and may GOD always keep u flying on the wings of doves R.I.P baby boy.u r truly missed by ur family especially ur kids and mom and kimberly and the twins! But before I go u have some beautiful kids and that lil brandon is ur twin! (Smile from heaven).

It's very hard losing a child, especially a grown man who also became your friend. I knew you had relationship with God and all the questions you had about Him, I believed were answered on 6/26/10 because you left here with a smile on your face that only GOD could have given you. Oh I miss all the practical jokes you played on us, I miss you being the life of the party, I miss how your smile would light up a room, you had a certain swagger and a real leadership ability and most of all you were a good father concerned about your kids, lol Little Brandon is a carbon copy of you, I see you in him when he smiles, laughs and talks. He even had you a birthday party and pretended to be you. Your popular phrase is still being said "Don't tell nobody but God"! Brandon you have know me to be a spiritual warrior and trust and believe God's bringing justice to this matter, remember the prayers that I put on you "no weapon formed against you shall prosper", now you understand that man can only touch the body, God's got the soul! And I know you're looking down from heaven on us all, I miss you and my heart hurts at our separation, but one glad morning ......

Here it is almost our birthday and I'm sitting here missing my BFF !! U left me here alone and each year I cry but not this year,I will celebrate as if u r here with me. Rest easy baby missing u more and more each day Fat Rat

I miss my dad

It's now 2017 and only a feed before the 7 year mark of Brandon's death! Oh I miss him so much. I'm sorry that he's not there to be a father to his 2 kids; Brianna and Brandon, they really need their dad. To date there has been no resolution or justice, yet this punk killer continues to kill others. May God avenge the blood of my sons death. One day we shall see each other soon! Loving you Son, forever and always!

Your mom,
Momma B

My Son, it's now 2017 and only a few weeks before the 7 year mark of Brandon's death! Oh I miss you so much. I'm sorry that you're not here to be a father to your kids; Brianna and Brandon, they really need their dad. To date there has been no resolution or justice, yet this punk killer continues to kill others. May God avenge your blood. One day we shall see each other soon! Loving you Son, forever and always!

Your mom,
Momma B

Man I miss u soooo much noone will ever understand what we were to each my birthday twin !! It's been almost 7 years and yet I still think about u all the time. Really going thru it because I just can't believe ur gone !!! We shared so many times happy and sad . U gave me life when no one could begin to get thru .....damn y they had to take u away??? Lord knows I know ur free running and doing everything just remember to cover those u left behind. Ill never forget I was going thru it the day of ur funeral I was going thru it something serious and ur min showed me that pic that smile on ur face gave me strength. Words can never express what this fool took away from us

U had sooo much life to live u left us at 24. This year u would have been 31 I sooo would give anything to see ur smile again.7 years and yet these fools have done nothing to catch this hater who took u away from us. Fly hi my angel I'll never forget u ......I'll never let go of the memories

Happy B-Day B love and miss u always!! Birthday ain't the same without u but by the grace of God I'm still holding on

Happy Birthday to you.....missing u like crazy my birthday twin!! No one will ever know what the fool took from me but here it is I'm still here working everyday to make u proud of the woman I've become even though I miss u soooooo much. Forever my bestie noone can ever measure up cause they will never be u !! Rest on my angel