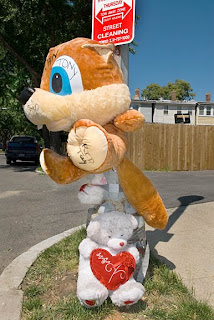 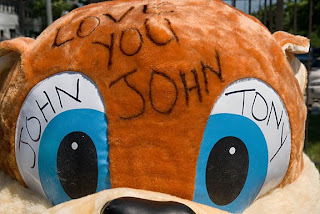 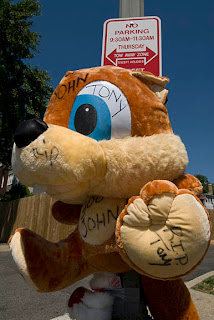 This shrine to a triple homicide consists of just three bears and short notes written in magic marker. The killing occurred on May 31st, 2008 in the 100 block of Holbrooke St NE Washington DC.
The Washington Post reported (6/1/08- page A 1 & A 18) that "at 4:00 AM three men were fataly shot after an argument on Holbrooke St NE... Police said the dispute might have begun in a nightclub. They said 35 shots were fired by at least 2 gunmen w/ semiautomatic weapons. One victim fell dead in an alley, one collapsed in the street, & one died in a car. Police identified them as Duane Hough, 27, of the 1400 block of Trinidad St NE, Anthony Mincy of the 600 block of Morton St NW, & Johnny Jeter, 24, of the 1700 block of Holbrooke."
In the next day's paper a woman wanted the shrine removed, but councilmember Thomas said to leave the shrine alone, noting that DC Public Works personnel have been attacked when removing shrines.

This very simple shrine- three plush bears for three murders- has since been added to: liquor bottles and a few more notes.

After this horrific incident, and in response to the other recent murders in the area, Mayor Fenty and Police Chief Lanier set up a task force. The area has been blockaded by police, and anyone coming in or out of Trinidad must pass through numerous checkpoints.

The young man I mentor, Dion Johnson, has several relatives who lived on Holbrooke St and Montello Ave, in the Trinidad/Ivy City section of DC. His Aunt Rags used to live just a short way from this site, and I know the area pretty well. 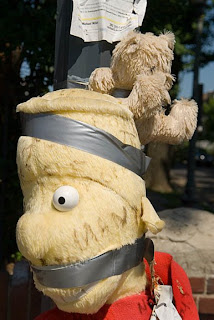 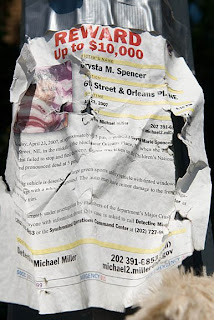 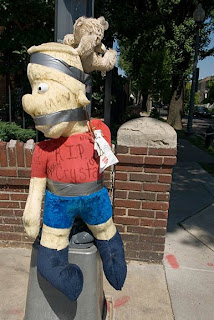 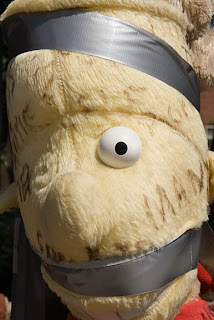 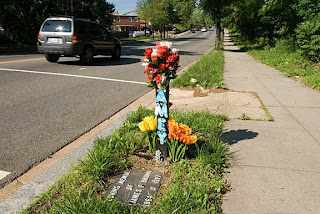 Shrine to Jamey Brown, 1964-1997 on the corner of Southern Ave and D St SE, on the Prince George's County side of this boundary road.

I surmise this is to an accident victim, though I am not sure. It is more permanent in nature than most in the DC area. The (artificial) flowers looked new. I have passed this site several times but never seen the flowers before. The inscribed marker with text is impossible to see from the road.

Update:
I noticed this renewal of adornment to Jamey Brown's shrine. A passerby I met near the site mentioned that this family periodically attends to the shrine, and has done so for years. 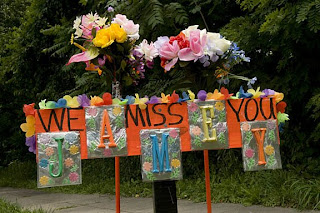 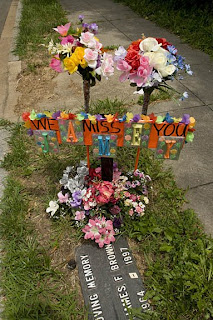