From a DC Police report: On Sunday, December 9, 2012, at approximately 5:40 pm, members of the Metropolitan Police Department's Sixth District responded to the 1700 Block of Minnesota Avenue SE, Washington DC, to investigate the sound of gunshots. Upon arrival, they located an adult female victim in an unconscious and unresponsive state in the doorway of a Washington Metropolitan Area Transit Authority bus (METRO), suffering from multiple gunshot wounds. DC Fire and EMS determined that the victim had no signs consistent with life. The victim, identified as Selina Brown, 20, remained on the scene and was later transported to the Office of the Chief Medical Examiner for the District of Columbia, pending an autopsy. A second victim, a female toddler suffering from a gunshot wound, was transported to a local hospital in stable condition. The operator of the bus sustained a non-life-threatening injury.

Javon Steven Foster, who was wanted for Murder II While Armed in the shooting death of Selina Brown, was found dead the next day in Long Island, NY, an apparent suicide.

The child injured in this shooting was Ms. Brown's baby. 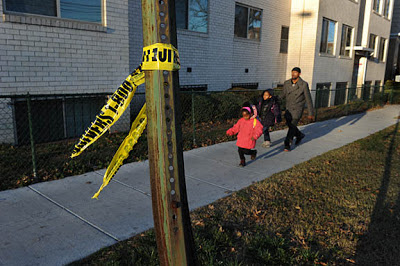 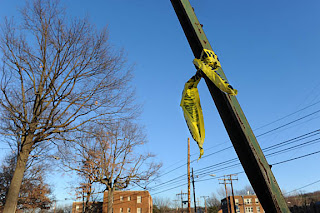 More information on this very sad situation can be found on HomicideWatch.
Posted by Lloyd at 11:32 AM 0 comments

I found these religious cards at the foot of the pole where police crime tape marked the slaying of Eliezer B. Reyes.

From news sources:  Eliezer Benjamin Reyes, 14, was shot just after midnight, early Wednesday morning December 5, 2012, in the 2200 block of Sheridan Street, in the Lewisdale, Maryland area. Officials say they're looking into the possibility that the shooting was gang related.
Read more:
WJLA  #1
Moving Washington Post article 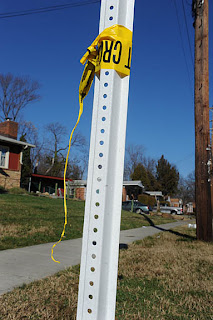 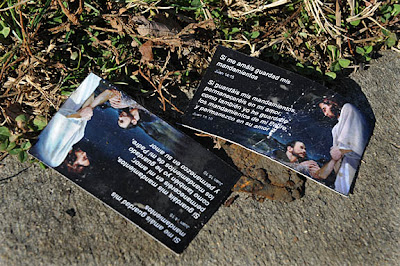 “If you love Me, you will keep My commandments"
Posted by Lloyd at 11:01 AM 0 comments