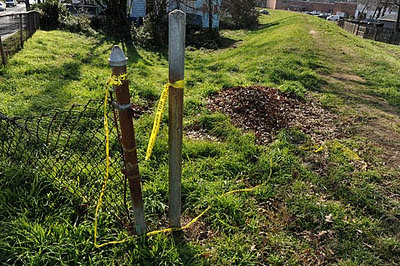 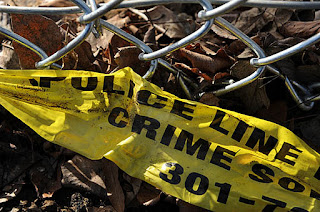 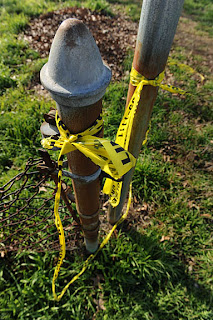 From a Prince George's County police report: On December 9, 2011, at approximately 10:30 pm, patrol officers responded to the 4600 block of 37th Street in Brentwood, Maryland for the report of a shooting. Upon arrival, officers found Eisenhower Kevin Victor, 21, of Brentwood, lying on the roadway suffering from a gunshot wound. He was transported to a local hospital and pronounced deceased shortly after. Detectives are currently working to identify a suspect(s) and motive in this case.

The police tape was spread out over a wide area, where a small park abutted a quiet residential neighborhood. There have been two homicides in this general area recently.

More information at GoryPG.
Posted by Lloyd at 8:38 AM 1 comments 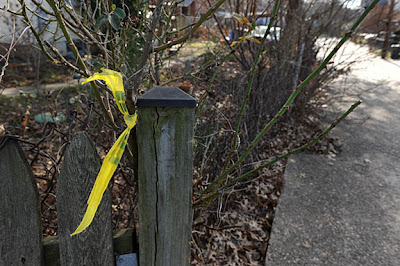 From a DC Police report: On Monday, December 19, 2011, at approximately 5:54 pm units from the Fourth District responded to a call for a shooting in the 1000 block of Taylor Street NE, Washington DC. Upon arrival, they located the victim, an adult male, identified as Derrick Ragland, 19, suffering from multiple gunshot wounds. DC Fire and EMS transported the victim to local area hospital. The victim later succumbed to his injuries and was pronounced dead.

According to other reports, Mr. Ragland was shot a block or so away, and collapsed in this alley, in what is generally a tranquil, well-kept neighborhood.

Sad... This police tape was the only marker left of his passage.

More information is at HomicideWatch.
Posted by Lloyd at 8:31 AM 0 comments

I wish to offer thanks to Tom LeGro for his sensitive portrayal of my work, and to Laura Amico of HomicideWatch for her dedication, understanding, and powerful efforts to spread awareness of the ravages violence causes in our community.