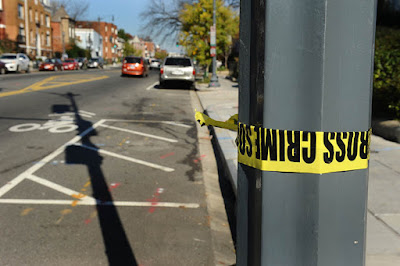 From a DC police report: Detectives from the Metropolitan Police Department’s Homicide Branch have announced an arrest has been made in the homicide which occurred in the 2900 block of Sherman Avenue NW, Washington DC, on Tuesday, October 20, 2015, at approximately 11:10 am. Members of the Third District responded to a call for the sounds of gunshots. Upon their arrival, they located an adult male suffering from apparent gunshot wounds. The victim, identified as Marcus Manor, 38, succumbed to his injuries on scene and was pronounced dead. On Monday, October 26, 2015, members of the Capital Area Regional Fugitive Task Force arrested Kevin Chase, 28, of Northwest, DC. He was charged with First Degree Murder While Armed.
Posted by Lloyd at 10:39 AM