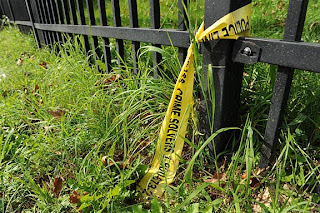 From a DC police report: On Tuesday, October 11, 2011, at approximately 2:50 pm units from the Fifth District along with a K-9 unit, responded to the 1300 block of West Virginia Avenue NE, Washington DC, for an investigate the trouble call. Upon arrival, they discovered an adult male suffering from stab wounds. DC Fire and EMS transported the victim, Mark A. Goldring , 45, to a local hospital where he succumbed to his injuries and was pronounced dead.
On Tuesday, October 11, 2011, Jewell Washington, 19, was arrested without incident. She has been charged with Murder Two While Armed.

More information at HomicideWatch.
Posted by Lloyd at 8:07 AM