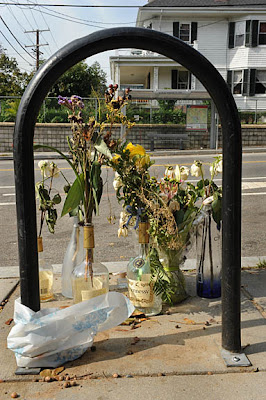 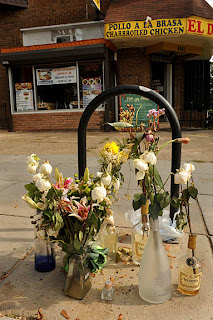 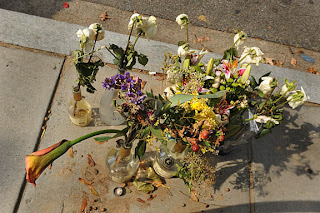 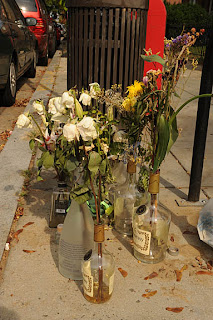 This street memorial is in front of the El Don ("The Lord") restaurant on upper 14th Street NW in Washington, DC.

From a DC police report: On Thursday, October 6, 2011, at approximately 3:47 p.m., units from the Fourth District were dispatched to the 4400 block of 14th Street, NW, Washington DC, to investigate the report of a pedestrian that was struck by a vehicle that left the scene. Upon their arrival, they located an adult male, Miguel Angel Drullard Jr., 22, lying in the street unconscious and unresponsive. DC Fire and EMS transported the victim to a local hospital where he was pronounced dead. Preliminary investigation has revealed that the striking vehicle may have intentionally struck the pedestrian. The lookout for the involved vehicle in this case is a Jeep Liberty that is red or burgundy in color with extensive front end damage.

Christian Navarrette-Rivas, 16, is in custody, and is accused of intentionally striking down Miguel Drullard Jr, 22, with his vehicle, a red Jeep Liberty. The slaying appears to have been related to a gang fight.

More information on the situation is at HomicideWatch.
Posted by Lloyd at 8:32 AM