Small street shrine to an unknown person, possibly Jelani Mohammed. There have been several recent slayings in this busy block. 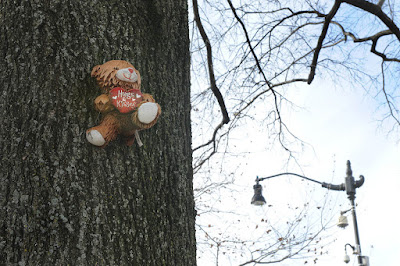 From a DC Police report: Detectives from the Metropolitan Police Department’s Homicide Branch announce an arrest has been made in reference to a fatal stabbing that occurred on Thursday, November 8, 2018, in the 1500 block of Benning Road NE, Washington DC. At approximately 9:31 am, members of the Fifth District responded to the listed location for the report of a stabbing. Upon arrival, members located an adult male victim suffering from a stab wound. DC Fire and Emergency Medical Services responded to the scene and transported the victim to an area hospital. After all life-saving efforts failed, the victim was pronounced dead. The decedent has been identified as Jelani Mohammed, 38, of Silver Spring, MD. On Friday, November 9, 2018, Dale Thomas, 28, of Northeast DC, was arrested and charged with First Degree Murder while Armed. On Wednesday, November 21, 2018, members of the Capital Area Regional Fugitive Task Force arrested Donnell Mills, 29, of Northeast DC. He was charged with First Degree Murder while Armed.