From a DC Police report: Detectives from the Metropolitan Police Department’s Homicide Branch seek the public’s assistance in identifying and locating a suspect in connection to a homicide that occurred on Monday, November 26, 2018, in the 1800 block of Benning Road NE, Washington DC. At approximately 1:49 pm, members of the Fifth District responded to the listed location for the sounds of gunshots. Upon arrival, officers located two adult male victims, suffering from multiple gunshot wounds. DC Fire and Emergency Medical Services responded to the scene. The first victim displayed no signs consistent with life and remained on the scene until transported to the Office of the Chief Medical Examiner. The second victim was transported to a local hospital for treatment of non-life threatening injuries. The decedent has been identified as Randall Francis, 20, of Southeast DC. The suspect has been identified as Malik Morris, 20, of Northeast DC. He is wanted for First Degree Murder While Armed.

Mr. Francis's life held much promise and he seems to have touched many. From the Washington Post. "Mr Francis died on the sidewalk at 1816 Benning Rd. NE, in front of the green-and-yellow door of the Baby Einstein Child Development Center, on a street already crowded with the memories of other crime victims.
A few doors down is another street-corner memorial — garland and beads spiraling up a no parking sign, a deflated balloon dangling from the top...
Benning Road east of the H Street entertainment strip has been a particularly violent stretch this year. Four people have been killed and several others wounded from the 1500 to the 1800 blocks in what police believe were unrelated attacks." 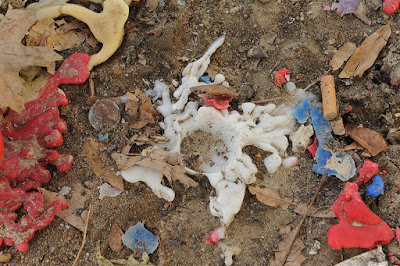 Thank you to Ms. Thomasina Reed, who told me that the shrine on this site had been just recently removed by the store owners (only the wax from the memorial candles remained), and to Lara Ajami, for her help, also.
Posted by Lloyd at 5:19 PM