This police crime tape at the site of a double homicide is in a residential neighborhood close to the Washington DC line.

Peace to all concerned.

From a Prince George's Police report: The Prince George’s County Police Department is investigating a double homicide in Oxon Hill, Maryland. The victims are Deangelo Green, 24, and Rashard Jackson, 35.  On May 15, 2015, at about 11:55 pm, patrol officers were called to the 700 block of Audrey Lane, Oxon Hill, Maryland, for the report of a shooting. When they arrived, they found Green outside suffering from gunshot wounds. He died at a hospital a short time later. Officers located the second victim, Jackson, behind a nearby apartment building. He had also been shot and was pronounced dead at the scene. Preliminarily, it appears he ran after being shot and collapsed behind the building. The investigation reveals the two victims were standing outside when they were shot. Preliminarily, detectives do not believe this was a random act. 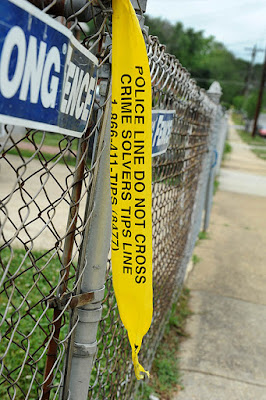