Shahabuddin Rana's memorial in front of his store 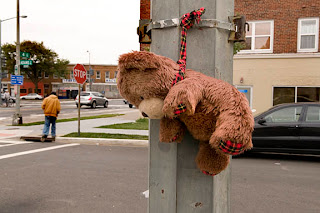 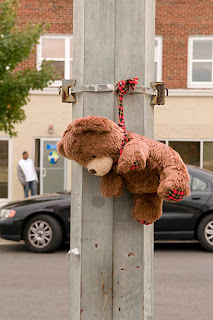 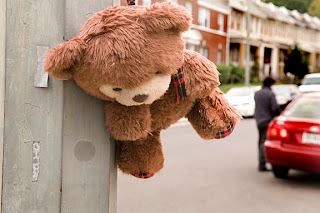 I found this small shrine remnant to Shahabuddin Rana, 44, in front of his Pizza Mart at 2300 4th Street NE, Washington DC.

Mr. Rana, a Pakistani immigrant, was killed on August 18, 2009. He died of blunt head trauma, multiple stab wounds, and his body was set partially on fire.
Shanika Robinson, 26, Leon Robinson, 25, and Isaiah Genus, 26, have been charged with first-degree homicide in his death.

Investigators believe Rana had stopped paying Ms. Robinson, who had married his immigrant brother in a cash-for-green-card arrangement, when the brother learned of her many sexual affairs. The three accused are alleged to have set his body on fire after killing him, and then stealing cigarettes, cigars, and about $2000 in cash from the store. Ms. Robinson spent about $1600 of this money on her rent, according to police.

A misery for all, and especially for poor Mr. Rana and his family. Salaam aleikum. Peace be with them.

There was another shrine in September 2007, now gone, less than fifty feet from this one.
It is posted on this blog at:
http://dcshrines.blogspot.com/2008/01/rip-lil-bo-two-more-washington.html
(the bottom three photos on this post).
Posted by Lloyd at 11:33 PM