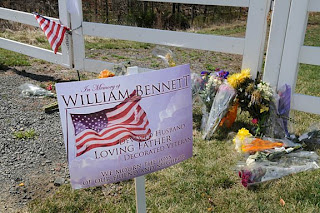 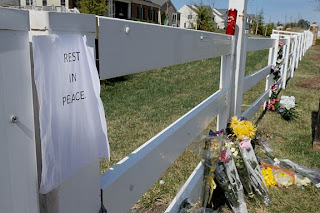 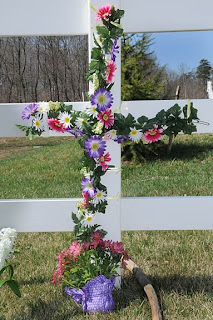 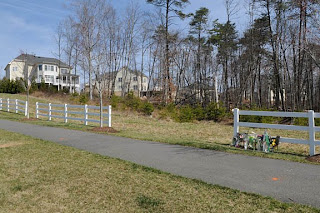 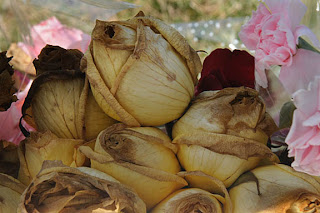 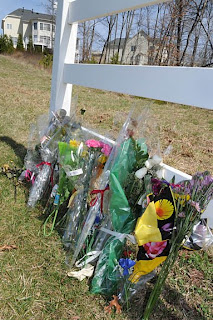 These roadside shrines are to William L. Bennett (Lt. Col, US Army Ret.), 57, and to his wife, Cynthia Bennett, 55, near the intersection of Rocky Creek Road and Riverside Parkway, in the Landsdowne area of Loudon County VA.
Landsdowne is a relatively new, spacious, and prosperous development community near the outer rim of Washington DC's Virginia suburbs.
According to the Washington Post, on March 22, 2009, at about 5:30 AM, police responding to reports of a suspicious white van, found the body of Mr. Bennett along Riverside Pkwy, and his terribly injured wife Cynthia in a ditch nearby. Both had been beaten, he to death. Mrs. Bennett remains in critical condition in a hospital under sherriff's guard. No concrete details of why the attack occurred are yet known. Colonel Bennett was an Iraq war veteran and a contractor for the CIA. A large march and shrine-side vigil was held by friends, family and neighbors one week after the murder. A local choir sang the hymn " Come By Here, Lord." Mr. Bennett was remembered as a family man, an avid long-distance hiker, and a diligent worker.

To justice, and to healing.

Update: Loudon County authorities have arrested Darwin Bowman, 18, of Annandale VA, and a 17-year old male from Sterling VA. in Mr. Bennett's killing. The attack is believed to have been a random "robbery gone bad." Prosecutors are assessing whether Mr. Bowman will face a death penalty at his trial. Additional arrests are likely.

Mrs. Bennett is now slowly recovering from her injuries.
Posted by Lloyd at 10:42 AM