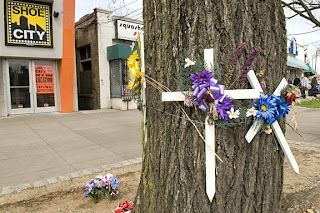 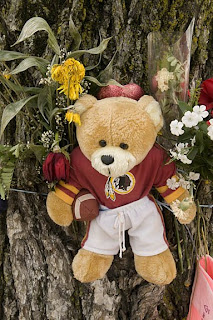 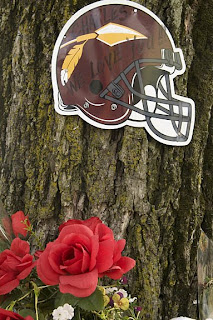 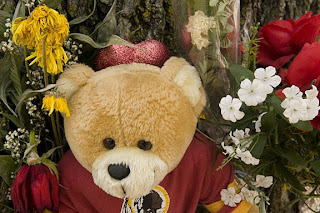 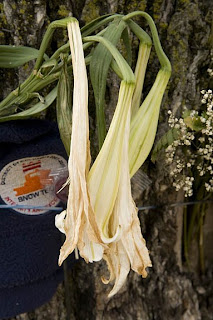 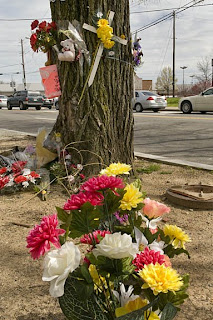 This shrine to Elwood Wallace is in the 2800 block of Good Hope Rd SE, Washington DC

DC police announced an arrest for the murder of Elwood Carl Wallace. Ronnell Calvin Knight, 54, of DC has been charged with Murder 1 While Armed.
Shortly before 6 pm on Friday March 27, 2009, police responded to the 2800 block of Good Hope Road SE, to investigate the report of a shooting. Upon arrival, officers found Elwood Carl Wallace, 52, of Upper Marlboro, MD, suffering from a gunshot wound. Emergency medical personnel could find no life signs. Mr. Wallace was pronounced dead on the scene.

According to the Washington Post, two witnesses allegedly saw Knight walk up behind Wallace and shoot him once in the back of the head in front of a vacant storefront, and then take off running.

Local residents erected this memorial on a tree near the site of the shooting, where Wallace sold lotion and oils from his sidewalk table.

I spoke to a pretty young book vendor whose tables are right next to this shrine. Apparently the two men in question had an argument earler in the day. She said the killing was in daylight. She got teary & quiet when speaking.
Posted by Lloyd at 9:49 AM