This memorial is on the grounds of the high school young Mr. Payne attended. A very sad and tragic situation. May he rest in peace. 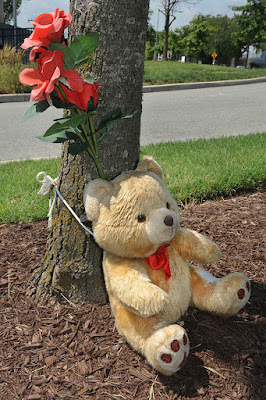 From a DC Police report: Detectives from the Metropolitan Police Department’s Homicide Branch have announced an arrest has been made in a homicide that occurred on Wednesday, August 18, 2021, in the 1400 block of Brentwood Parkway NE, Washington, DC.  At approximately 3:11 pm, members of the School Security Division were assisting with Safe Passage when they were alerted to an altercation at the listed location. Upon arrival, members located a juvenile male suffering from stab wounds. The victim was transported to a local hospital for treatment of life threatening injuries. After all life-saving efforts failed, the victim succumbed to their injuries and was pronounced dead. The suspect was apprehended by responding officers.The decedent has been identified as 15 year-old Kemon Payne, of Southeast, DC.

On Wednesday, August 18, 2021, a 16 year-old juvenile male, of Southwest, DC, was arrested and charged with Second Degree Murder while Armed.