From a DC police report: 3300 block East Capitol St SE Detectives from the Metropolitan Police Department’s Homicide Branch are investigating a fatal shooting that occurred on the Anacostia River Trail, south of the 3300 block of East Capitol Street SE, Washington DC, on Wednesday, July 26, 2017. At approximately 8:30 am, members of the Sixth District were dispatched to the listed location for the report of a shooting. Upon arriving on the scene, members located an adult male suffering from multiple gunshot wounds. DC Fire and EMS responded to the scene. The victim displayed no signs consistent with life and was pronounced dead. The decedent has been identified as Victor Williams, 37, of Southeast DC.

These burned candles from a vigil were located in the middle of this ordinarily tranquil park trail along the Anacostia River.

May it return to tranquility soon, and evermore. 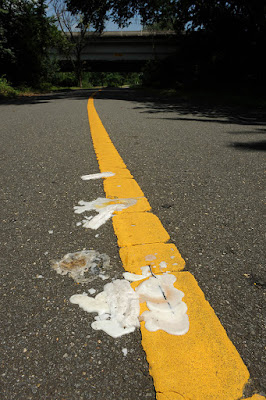