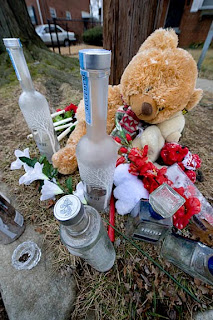 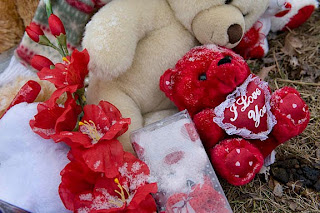 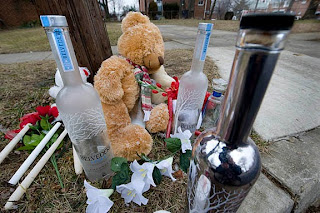 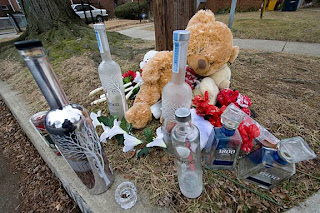 From a PG police report: On January 4, 2011 at approximately 11:43 p.m., Prince George’s County Police officers responded to the 4000 block of Norcross Street in Hillcrest Heights Maryland, for a report of a shooting. When patrol officers arrived, they discovered Michael DeAngelo Layne, 19, of Temple Hills, suffering from a gunshot wound. He was pronounced dead on the scene.

I have been contacted by Mr. Layne's mother, who informed me that her son "was not transported to an area hospital where he was pronounced dead of a gunshot wound.
He was grazed in the chest by a bullet that did not puncture or enter his body and he had a heart attack."

The investigation is still ongoing while detectives continue to search for a suspect(s) and establish a motive.

There has been a terrible streak of slaughter occurring in PG County of late. This is the only shrine I have encountered there this winter.

I wish Mr. Layne's mother, and his entire family, every strength, healing, peace, and uplifting memories of their loved one.

For more information on the violent situation in the County, see:
http://gorypg.blogspot.com
Posted by Lloyd at 12:32 PM