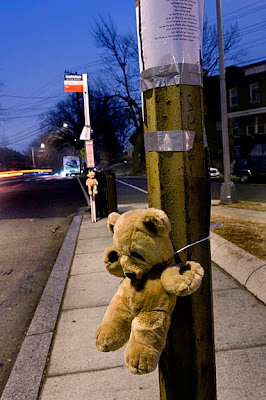 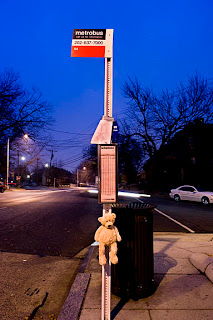 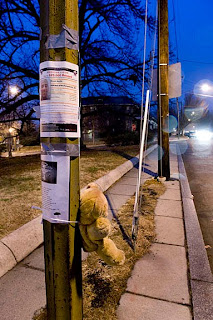 From a DC police report:
On Sunday, January 2, 2011, at approximately 1:30 pm, units from the Fourth District responded to the 4500 block of New Hampshire Avenue NW, Washington DC, for the report of a shooting. Upon arrival on the scene, they located two victims suffering from gunshot wounds. Both subjects were transported to a local hospital where one of the victims succumbed to his injuries and was pronounced dead.
The decedent is identified as Bryant Morillo, 16, of Hyattsville, MD.

I spoke with two people at the site, a bus stop in a generally quiet part of the city. One, on older man named Arthur, built the shrine; the other, Sharon, had watched as her daughter ran to the scene of the shooting and attempt to give CPR. She told me that the other person shot was Bryant Morillo's cousin. Sharon said seven shots were fired that night.

Peace peace peace... a steady prayer, in the Creator's purpose.
Posted by Lloyd at 12:42 PM