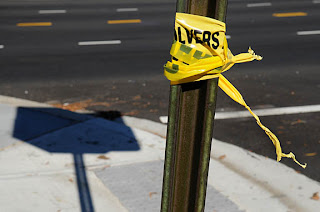 From police reports: On Friday, October 29, 2010, at approximately 3:45 pm units from the Fourth District responded to the 500 block of Madison Street NW, Washington, DC, for the report of a shooting. They located three victims suffering from gunshot wounds. DC Fire and EMS transported two victims to area hospitals with non life threatening injuries. One victim, Angel Morse, 13, of NW DC, was pronounced dead on the scene.

At approximately 5:50 pm, an off duty US Park Police officer, after hearing the lookout broadcast on WTOP Radio, spotted the vehicle the suspect. Sixth District officers attempted to stop the fleeing vehicle on Kenilworth Avenue. The suspect refused to stop and continued fleeing into Maryland where he lost control of the vehicle and collided with a building near the intersection of Kenilworth Avenue and Eastern Avenue. Robert Carter, 39, of NW DC is currently being held in Prince George’s County detention.

“Although this is a sad situation, it is also a prime example of how we all can work together to make Washington DC a safer place. With cooperation from the community, the media, other local law enforcement agencies, and an alert off duty police officer, we were able to bring this case to a swift end without further loss of life.” said DC Police Chief Lanier.

Good work by the cops... but still, another family is grieving for the loss of their child.