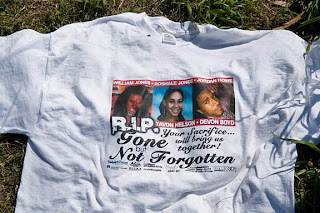 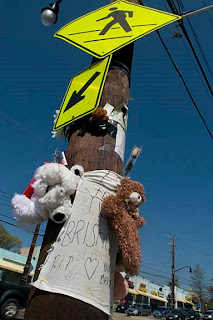 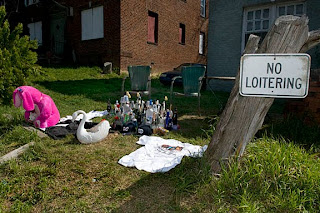 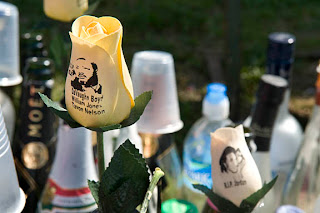 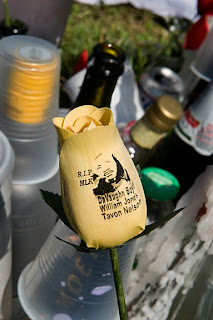 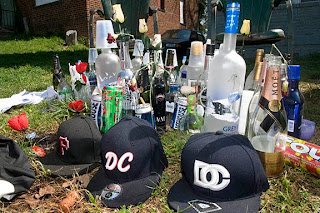 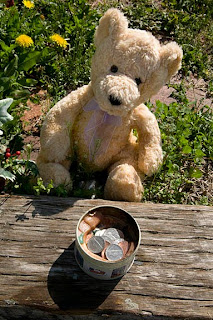 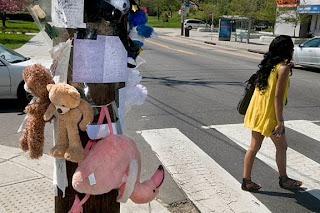 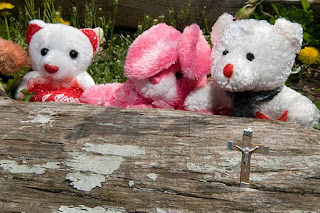 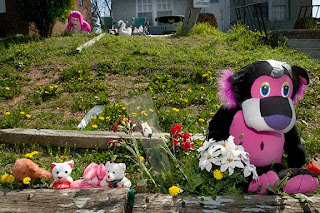 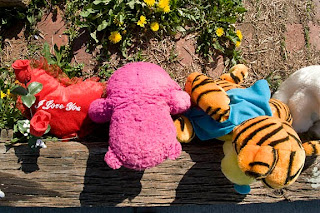 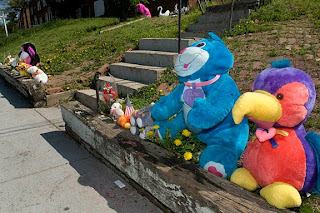 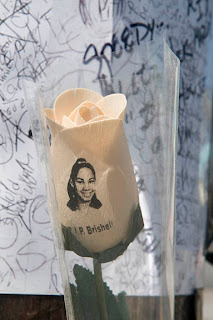 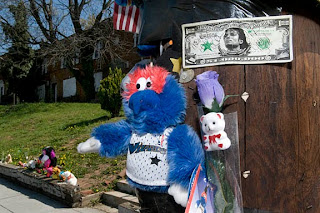 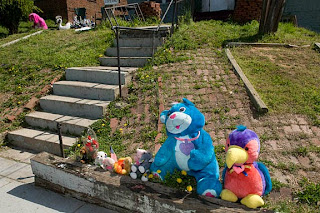 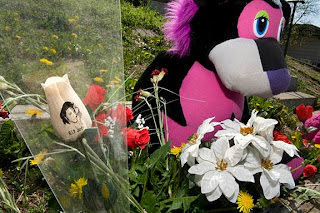 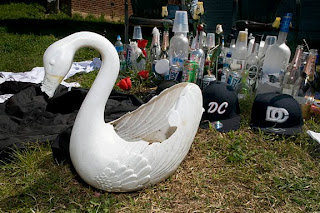 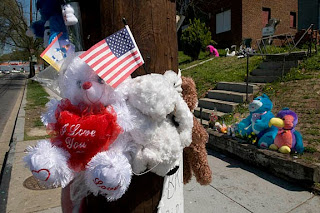 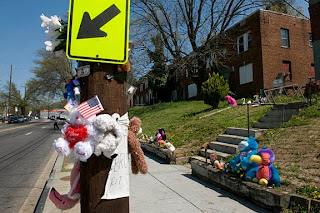 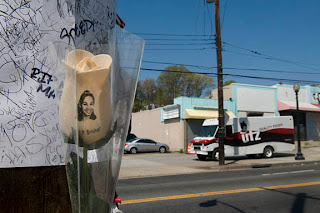 From DC police reports. There has been a lot of material in the media on this mass laying, which allegedly originated over a missing bracelet.

This large shrine really got to me.

At 7:30 pm on Tuesday, March 30, 2010, officers assigned to the 7th District responded to sounds of gunfire in the unit block of Galveston Street SW, and to reports of multiple shooting victims at South Capitol and Brandywine Streets, SE, Washington, DC.

On Galveston Street SW, officers located Tavon Nelson, 17, who was transported to an area hospital and pronounced dead.
Officers who responded to S. Capitol & Brandywine Streets SE, where eight gunshot victims were located. They observed a vehicle fleeing the area and initiated pursuit with helicopter assistance into Prince George’s County, MD, and back into DC.

During the pursuit, an AK-47 style assault rifle was thrown from the vehicle, and recovered. The pursuit continued to the area of Yuma and Atlantic Streets SE, where the vehicle crashed and four suspects fled on foot. Officers pursued them, resulting in the detention of three of the four suspects. Nathaniel Dwight Simms, 26, Orlando Carter, 20, and a 14-year-old juvenile male, all of whom reside in SE DC, have been charged with First Degree Murder While Armed. The search for the 4th suspect is ongoing.

The surviving victims were transported to hospitals. Their identities are being withheld because they are witnesses in the case.

“This is a horrible, senseless tragedy, and my thoughts and prayers go out to the families, friends and neighbors of the victims,” said Mayor Adrian M. Fenty. “We commend our first responders for their swift action that saved the lives of several victims and lead to the arrest of three of the suspects this case. Police will work around the clock to ensure this case is brought to closure.”

Related: At approximately 12:30 am March 22, 2010, Jordan Howe, 20, of the 3200 block of Buena Vista Terrace, SE. was discovered by police in the 1300 block of Alabama Ave SE, suffering from apparent multiple gunshot wounds. He was transported to a hospital where he was pronounced dead.
Nineteen-year-old Sanquan Carter of Southeast Washington was arrested in Northwest Washington March 23, 2010. He has been charged with Murder Two While Armed in the homicide of Mr. Howe. His brother, Orlando Carter has been charged in the mass shootings.
Posted by Lloyd at 1:42 PM

BRISHELL JONES WAS A PATIENT AT MY OFFICE AND EVERYTIME I HEARD OR SEE ANYTHING ABOUT HER ITS SENDS CHILLS THROUGH MY BODY. FROM THE SHORT TIME I DID KNOW HER I FOUND HER TO BE A SWEET YOUNG LADY WHO REALLY LOVED LIP GLOSS. SHE WAS ALWAY RESPECTFUL. SHE WAS A VERY BEAUTIFUL YOUNG LADY WITH SO M UCH TO LIVE FOR. REST IN PARADISE BRISHELL

some of brishell friends made a page on facebook for her they also have a guestbook for her
FACEBOOK: R.I.P BRISHELL
GUESTBOOKS
http://www.legacy.com/gb2/default.aspx?bookID=2577121942111

i remember i used 2 have class with brishell at frederick douglass high school. she is such a nice girl with a smile that can brighten a classroom full of gloomy people. she was also intelligent an always called me and friends honey.i miss her soo much. the last time i got to be in her presence was 9th grade when we first met..love u brishell

jordan howe jordan howe... we used to kick it back in 07... he wa sthe cooleest and cutest dude i had ever met he even had pretty feet lol. he always kept me luaghing and made sure i kept a tob cd in my car. my last and unforgetable memory of u was a warm day in may and were listening to r. kelly and nelly's #1 stunna... and he definitely was #1 but never a stunna he was # 1 jordan TEARS... my prayers contine to go out to ur fam especially ur mom.

Tadom was an outstanding person always spoke his mind, respectful, very intelligent loved sports.he also enjoyed music, he didn't even get a chance to experience the greater things in life.he may have not been perfect but everyone deserves a chance of living an making the best of it.enjoy life, an pray for divine peace.....love......live........life........