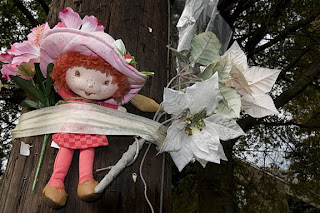 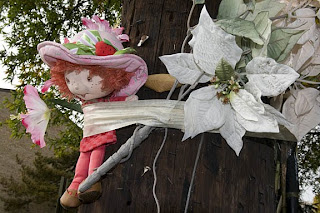 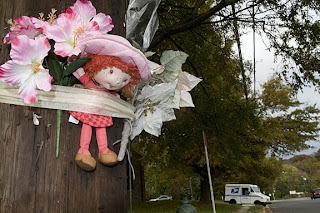 This small tender shrine is built in remembrance of Ashley Davis. It is in the 3000 block of Brinkley Road, in Temple Hills Maryland.
Fourteen-year old Ashley was hit by a speeding gold Lincoln Continental sedan on September 1, 2009, while she was walking to the morning schoolbus. The Lincoln injured another boy in the street, and then hit a van with a woman and four children inside. Ashley suffered major brain trauma from the crash. She struggled to hold on to life for about two weeks, but died on September 16th, at Childrens Hospital.

She had been a well-liked freshman at Crossland High School. According to news reports, her mother, Nycole Davis, is very deeply grieved.

May the Creator give us peace, as it is beyond our ability to understand.
Posted by Lloyd at 5:09 PM