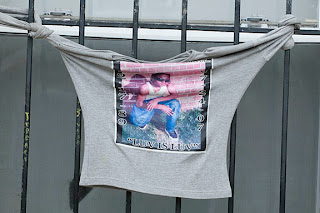 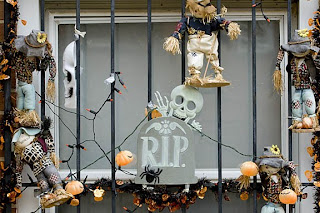 This shrine has been identified as being erected in the honor and memory of Cortez Lilly (see comment added by his brother below). Rest in peace.

Unfortunately, there have been many deaths in the Clay Terrace area.

I also found this Halloween decoration nearby. Anywhere else, it would just be light and silly spooky entertainment.
In this neighborhood, it also serves (probably unconsciously, though one should not be certain) as a reminder of the very real and ghastly potential for sudden and violent death to be waiting close by.

additional August 2010 update, from DC police files and online news sources:
Washington Post July 24, 2007
D.C. police have arrested a man in a hit-and-run accident last night in which a teen on a stolen motorcycle was killed, authorities said today.
The teen, Cortez Durrell Lilly, died after he collided with a pick-up truck at about 10:30 p.m., police said. The incident took place on East Capitol Street, near 55th Street in Northeast.
The driver of the truck fled the scene but was later arrested by police.
Lilly lived in the 5300 block Clay Terrace NE.

At approximately 5:30 am July 24, 2007, police were called to the 800 block of Delafield Place, NW, for the report of a stolen auto. During the investigation officers determined that 40-year-old James Brown, of the Delafield address, was the alleged operator of the pickup truck involved in the accident at East Capitol and 55th Streets, NE. He was charged with Leaving After Colliding.
Investigation indicates that the Suzuki motorcycle had been stolen on Sunday, July 22, 2007, during an armed carjacking in the 2400 block of Rhode Island Avenue NE.
- Allison Klein
last night at 2am i got a text from my sister that read
"Cortez passed in a motorcycle accident."
my heart was broken.
he was only 17 years old.
he had just gotten home from being away far too long.
he was a brother,
a father,
a friend,
he was my little cousin.
i love you, and i will miss you.

GOD i know he was flawed, but i pray you see his heart and forgive him for the wrong he has done.
i pray you will except him into your arms. 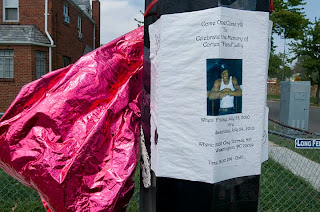