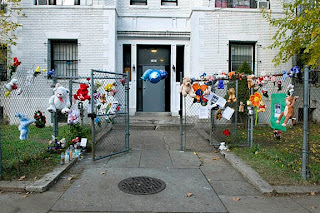 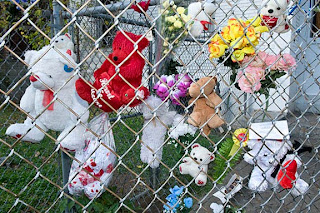 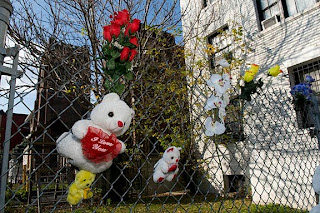 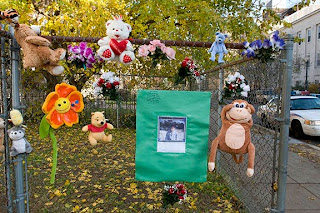 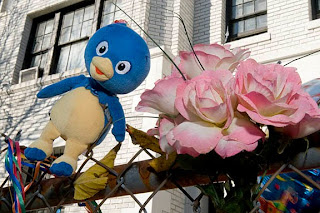 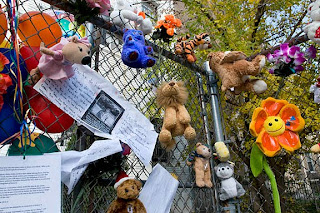 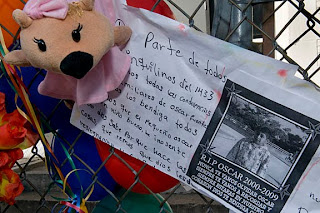 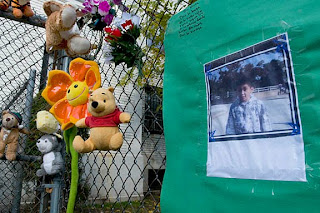 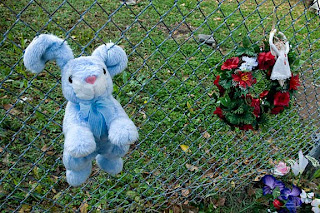 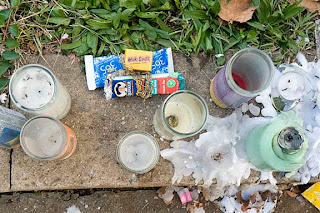 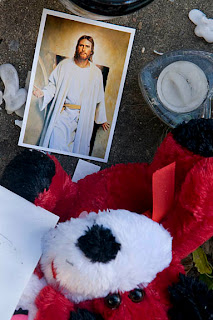 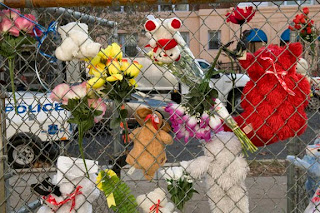 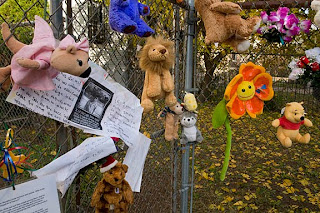 From police and press (The Examiner) reports:

On Saturday, November 14, 2009, at approximately 9:35 PM, officers from Third District were called to an apartment building in the 1400 block of Columbia Road, NW, Washington, DC, to investigate the report of a shooting. Upon arrival, officers discovered a juvenile male inside suffering from an apparent gunshot wound. The victim was identified as 9-year-old Oscar Fuentes.
On that Saturday, members of the Fuentes family were walking upstairs to their apartment when a strange man confronted them and demanded money. They ran. When they made it to their front door, 9-year-old Oscar quickly let them in and closed it fast. Following them, police say, was Josue Pena, armed with a handgun. Oscar, being the inquisitive youngster he was, put his eye to the peephole. That‘s when police say Pena fired a shot directly into the door, striking the boy and killing him.
On Tuesday, November 17, 2009, Josue Pena, 26, of no fixed address was arrested in Hyattsville, MD by members of the Capital Area Regional Fugitive Task Force. Mr. Pena has been charged with First Degree Murder While Armed in the homicide of Oscar Fuentes.

A large and ongoing vigil was held by the family and community members in front of the dwelling where Oscar lived and was murdered.

Oscar Fuentes' family is accepting donations from the public.
Anyone who would like to contribute may send donations to:
Office of D.C. Councilmember Jim Graham
1350 Pennsylvania Avenue, NW Suite 105
Washington D.C. 20004

Councilmember Graham will forward all donations to the Fuentes family.

Prayers for this innocent child...

UPDATE:
from DCist:
http://dcist.com/2009/11/suspect_in_childs_murder_found_dead.php
The man who was arrested and charged in the Nov. 14 killing of Oscar Fuentes has been found dead inside his cell in the D.C. Jail, according to a report from WTTG/FOX5. Josue Pena had been charged with first-degree murder in the death of Fuentes, who died after being shot through the door of his Columbia Heights apartment. The Washington Post reported earlier that paramedics had been called to the jail for a call of an unconscious inmate this afternoon. WTTG says Pena was found hanged inside his cell just after 1 p.m. He was pronounced dead later at Howard University Hospital, with the cause of death determined to be cardiac arrest by asphyxiation. The report also includes these details:
Pena told prosecutors he had a gun in his waist band, but it accidently went off as he walked up the stairs.

Court documents indicate police also found the murder weapon, a .22 caliber revolver at his uncle's home on Kenyon Street NW. One tenant at the home with a 2-week-old baby says the suspect was there Saturday an hour after the shooting looking for a place to stay.
WTOP says Pena's death is under investigation.
Posted by Lloyd at 3:42 PM

This because of the terrorists because I know they're bad he always chasing innocent people it could be because I had heard Oscar was "Latino".