From a DC Police report: Detectives from the Metropolitan Police Department’s Homicide Branch are investigating a homicide that occurred in the 4700 block of 1st Street SW, Washington DC, on Tuesday, December 15, 2015. At approximately 2:51 pm, members of the Seventh District were flagged down in reference to a shooting. Upon arrival, they located an adult male, unconscious, and suffering from multiple gunshot wounds. D.C. Fire and Emergency Services responded to the scene and transported the victim, identified as Arthur Baldwin, 30, to a local hospital, where all lifesaving efforts failed.

I found the police tape in the woods of the road at this area, the southernmost neighborhood of the District. I am not sure if the flowers are placed in memory of Mr. Baldwin, but they were directly adjacent to the site of his slaying. 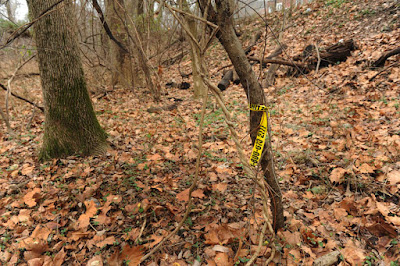 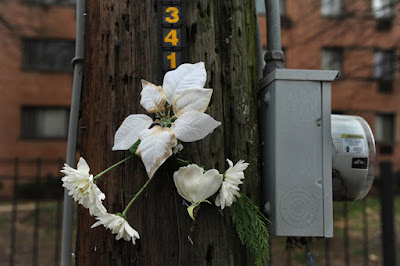