Scene of a murder: Police tape at the site of Domingo Ezrike's murder 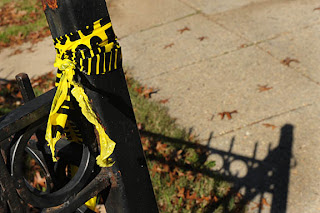 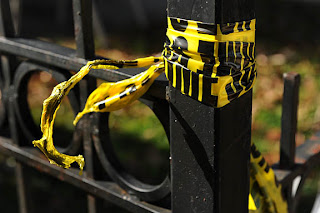 From a DC police report: On Saturday, October 22, 2011, at approximately 3:55 am, units from the Sixth District discovered an unconscious and unresponsive adult male suffering from a gunshot wound in the 4300 block of Ponds Street NE, Washington DC. DC Fire and EMS determined that the victim had no signs consistent with life. The victim, Domingo Ezirike, 40, was then transported to the Office of the Chief Medical Examiner where he was pronounced dead.
On Sunday, October 23, 2011, members of the Homicide Branch arrested Rashad Terrell Slye, 20, charging him with First Degree Felony Murder while Armed for the homicide shooting of Domingo Ezirike.

Mr. Ezrike was a taxi driver who had picked up Mr. Terrell as a customer. It appears that the slaying resulted from a dispute over a shorted fare of seventy-five cents, and possibly a disagreement regarding music on the cab's radio.


More information about this particularly senseless tragedy can be seen at HomicideWatch.

A prayer for peace for Mr. Ezrike's loved ones.
Posted by Lloyd at 3:06 PM