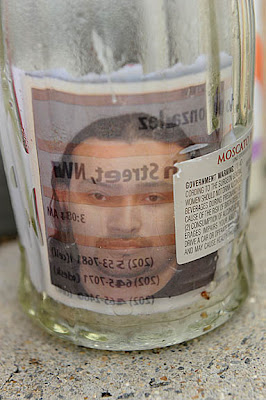 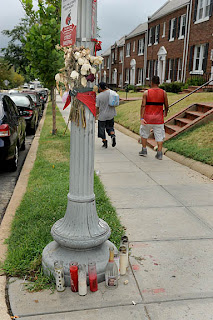 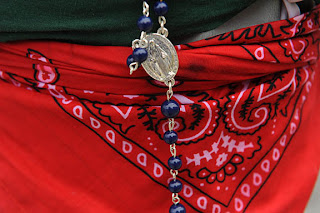 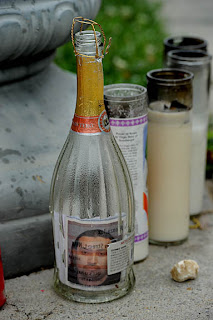 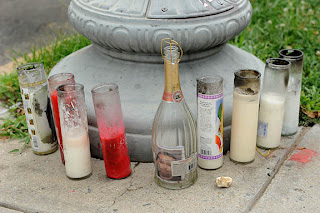 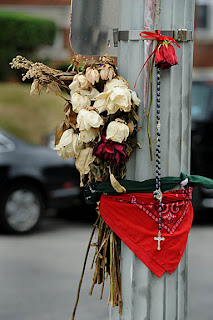 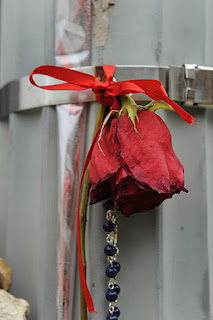 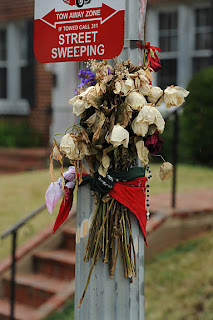 From a DC police report: On Tuesday July 19, 2011, at approximately 3:08 am, Units from the Fourth District responded to the 900 block of Randolph Street NW, Washington DC, to investigate the report of a shooting. Upon their arrival, they observed a male suffering from an apparent gunshot wound. DC Fire and EMS determined that the victim had no signs consistent with life. The victim, David Eduardo Gonzalez , 23, of Northwest DC, was transported to the Office of the Chief Medical Examiner and was pronounced dead.

Though I have no further information on Mr. Gonzalez, but a red neckerchief is usually a sign of the Bloods.

A young woman passerby at this street memorial shook her head sadly, and commented "it never stops, does it."

I pray that it does someday, and in our time.

More on Mr. Gonzales is at HomicideWatch.
Posted by Lloyd at 10:52 AM

Just wanted to point out that on both light poles, there were 3 bandanas in 3 different colors- red, white, and green- which may be a reference to his roots (e.g. Mexico's flag colors) rather than a gang. I'm not Pollyanna, I just don't want to jump to conclusions. The shrine has grown now to include a cross with "David Castigado" and the dates 01/19/1988-07/19/2011.

The cross unfortunately has been removed by onlookers......i know we do and live diffrent respect to a dead on should always be respected. No matter your social statue. Hazeredess we put them up to remind us and for some to keep us on trake...to walk lightly and appreciate every day to the fulist

People become so quick to judge. All of this was removed due to people's opinions and lack of respect. Nobody seemed to know him all that well to show such disrespect. He was one of the nicest, polite, happiest person you could ever meet. Not to mention a beautiful baby girl he will never be able to see grow up. People shouldn't judge by anybody social standing because all though he was part of a clique he respected anybody he earned it. He was the calmest of them all. Everybody wondered why him and still wonder what he had ever done wrong. I love and miss him so much yet I never had the chance to tell him any of this. The last time I ever saw him he had the biggest smile on his face. His smile was beautiful. He was so protective of everybody in his life and now he is gone. May god have him in his glory and hopefully is is watching us from up there and I hope I'm making him proud. R.I.P. Castigado. :(

Till this day I still cant accept it.. I try think to myself that hes home and that after work ill see him. But when reality hits I realize hes gone and its breaks my heart. Not only was he like a brother but also a best friend that was there wen we really needed him. Not a day by were I didn't see him and talked to him. He was always around us :( Hurts so bad that none of that will ever happen again because some random as person took his life away for no reason. Not knowing hes one of the most cheerful and happy person out heer.
But god will take care of that casti is now looking over us and his seed now stands. Every time I see his daughter I cant help it but to cry she looks just like him her smile just alike:(, any were i go i feel like i heer him laughing always cracking jokes.. If I was to write down all the memories I have Ill never finish because there endless. maybe no one spent so much time with him as we did. Everyone use to make fun of him and say that we were his parents... If I could give my life up for you I would have..Ever since you passed away its not the same I miss you so much CASTI remember that we both will forever keep u in our hearts RIP CASTI...