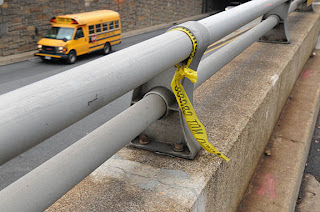 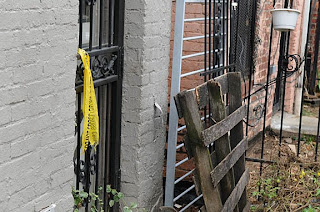 From DC police reports: On Saturday, November 6, 2010, at approximately 3:30 am, units from the Fifth District responded to the Unit block of N Street NW, Washington DC, for the report of a stabbing. Upon their arrival they located a victim, Kevin Willis, 19, of NE Washington, suffering from stab wounds. The investigation revealed that the stabbing occurred in the Unit block of Hanover Place, NW. The victim was transported to a local area hospital where he was admitted. On November 22, 2010, Mr. Wilis succumbed to his injuries and was pronounced dead.

I found this police tape both in an alley behind Hanover Place, and on a guardrail on busy North Capitol Street a few paces away. The Capitol dome was dimly visible in the mist a mile or so in the distance if you walked a few feet from the railing.