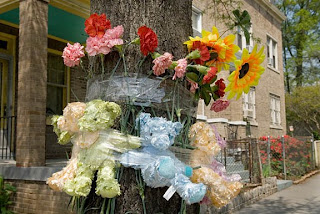 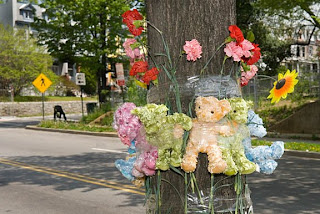 The Washington Post reported that Gary Oliver English, a mechanic for Comcast, was shot and killed Monday April 14, 2008 from a gun fired out of a sports utility vehicle. He was hit multiple times. Police are investigating if the murder was gang-related.
A man, aged 60, who police called an innocent bystander, was grazed. This shrine is in the 2000 block of Lincoln Rd NE Washington DC.
Posted by Lloyd at 9:00 AM

I did some research on this case. The defendants (4 of them) are charged with 100 different crimes in furtherance of gang activity.