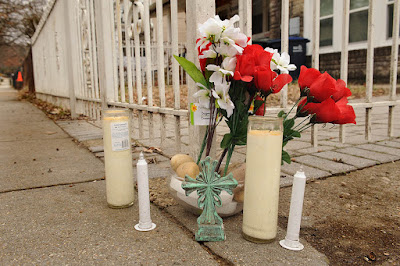 From a DC Police report: Detectives from the Metropolitan Police Department’s Homicide Branch are investigating a homicide that occurred on Monday, January 6, 2020, in the 2400 block of Franklin Street NE, Washington DC. At approximately 1:36 pm, members of the Fifth District responded to the listed location for the report of a shooting. Upon arrival, officers located an adult male suffering from multiple gunshot wounds. DC Fire and Emergency Medical Services responded to the scene and transported the victim to an area hospital for treatment of life threatening injuries. After all life-saving efforts failed, the victim was pronounced dead. Two additional adult male victims were located after they sought treatment at a local hospital for non-life threatening injuries. The decedent has been identified as Lamar Walters, 38, of Northeast DC.

From WTOP: "D.C. police Cmdr. William Fitzgerald said bullets began flying around 1:35 p.m. outside a beer and wine store on the 2400 block of Franklin Avenue NE near Langdon Park Recreation Center. They found a man shot on the curb, who was in grave condition, Fitzgerald said. The victim later died. Police later discovered that two other men showed up at local hospitals, Fitzgerald said during a news conference. The people who congregate at the store where the shooting happened was targeted, but Fitzgerald said police do not yet know if the victims were the intended target. Fitzgerald acknowledged that the store has been a sore spot in the community for a while, calling it a “drain on resources.” He said his officers have made several drug arrests there, set up cameras and monitored it using overtime hours. Fitzgerald added that he hopes to get the store temporarily closed. Police have not yet released the identity of the victims, and they are talking with witnesses to gather suspect information."

There is now a police 'shot-spotter' alert system installed in front of this site.

May there be peace and healing for everyone concerned.
Posted by Lloyd at 10:41 AM