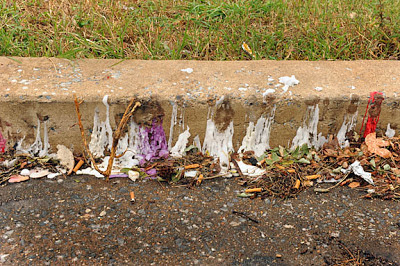 These candles are the remnants of a vigil held in honor and memory of Brittany McKinley, who recently was slain near her home on September 16, 2012.

From a Washington Post blog: Friends and family members of the 25-year-old Capitol Heights woman shot and killed near her home on Heath Street will gather at the scene of the slaying Thursday night for a candlelight vigil to honor the person they remember as a loving mother and hard worker, family said. The vigil for Brittany Sade McKinley will be in the same area where the young woman was gunned down early Sunday morning. Pamela Epps, 44, McKinley’s mother, said the vigil is meant to humanize her daughter — a loving mother of a 6-year-old boy — and present her as something more than a nightclub worker. “She did like any girl. She was out there working, trying to provide for her and her son,” Epps said. “This child sits in here and sleeps with her shirt. It’s disturbing.” McKinley’s slaying occurred about 6 a.m. Sunday in the 4600 block of Heath Street. Police have said she and a 23-year-old woman were shot by Michael Jerome Stewart, 33, of Upper Marlboro, believed to be McKinley’s ex-boyfriend. Stewart was later arrested and charged with first-degree murder in the incident. Police have said Stewart got into a confrontation with McKinley at Irving's Night Club before the shooting, and after security personnel threw him out of the club, he went to McKinley's home and waited for her. As she and the 23-year-old pulled up, Stewart opened their car door and opened fire. The 23-year-old was hit by gunfire but her wounds were not life threatening. Epps said McKinley worked at the club as a “professional dancer,” though she disputed that Stewart and her daughter had ever been romantically involved. She said Stewart had romantic feelings for her daughter that were not reciprocated. Epps said that her daughter was a loving mother who dreamed of one day becoming a veterinarian. In her free time, McKinley enjoyed taking her son to the park, the pool or the movies.


May she rest in peace, and her child get every comfort and strength needed.
Posted by Lloyd at 3:32 PM