I believe this balloon marks the passing of Henry Charles Miller. 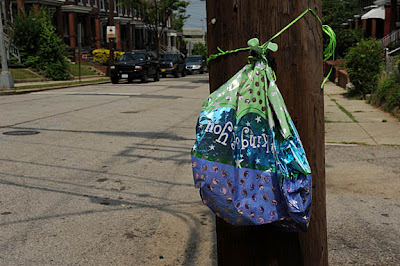 From a DC police report:  On Sunday, June 3, 2012, at approximately 1:05 am, foot beat officers on patrol in the area of the 1100 block of Chicago Street SE, Washington DC, responded to the report of a shooting at that location. Upon arrival on the scene, they found an adult male victim, identified as Henry Charles Miller,  32, suffering from gunshot wounds. Personnel from DC Fire and EMS transported the victim to a local hospital, where he subsequently succumbed to his injuries and was pronounced dead.
A look out for a suspect and a vehicle was broadcast. Officers spotted the suspect who was pursued and apprehended in the 1400 block of Brentwood Parkway, NE. The suspect has been identified as David Allen Shepherd, 48. He has been charged with Murder One while Armed.

More information is on HomicideWatch.
Posted by Lloyd at 9:46 PM