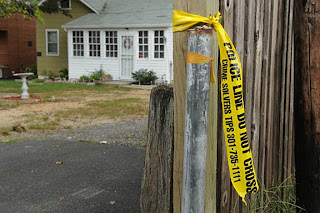 From press reports: Two stabbings on Sunday August 22, 2010 left two men dead in Forestville, MD.
Police responded to a call at 3:38 AM about a man in the 7700 block of Marlboro Pike who had apparently been stabbed. He was taken to a hospital, where he died.
A minute after the first call, officers responded to the 2800 block of Parkland Drive, where a male victim was found with stab wounds. He was also taken to a hospital and pronounced dead.
A Prince George's County police spokesman said authorities will investigate whether the stabbings were related.
The names of the victims had not been released.

This police tape is at the 2800 block of Parkland Drive site.
Posted by Lloyd at 8:05 PM