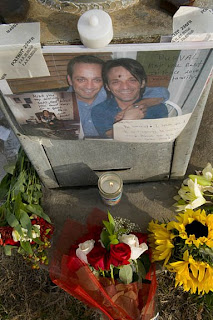 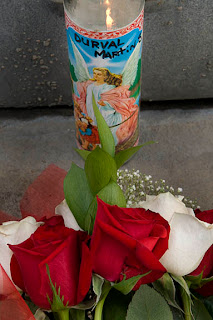 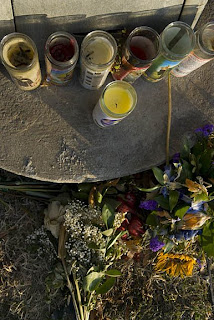 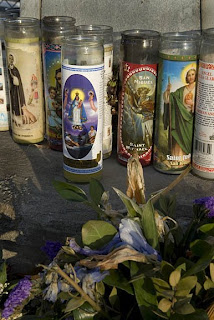 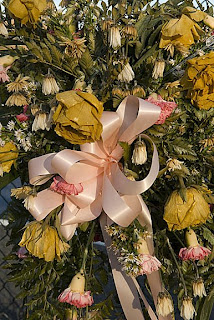 I visited this shrine first visit on December 18th, 2008. I saw and photographed new offerings on Christmas Day.

Mr. Martins, 35, was shot several times, and was found on the street by an officer at 3:00 AM on December 16th, 2008, near the grounds of a skateboard park, next to Shaw-Garnett-Patterson Middle School. He was pronounced dead at the scene.

The writing on the shrine by his mother and friends is brief, but direct, touching, and emotional.

Excerpts from the Washington Blade, December 19, 2008:
"Two days after a gay man was shot to death near Logan Circle, members of the man’s family huddled together at a makeshift memorial at the murder site before making an appeal for the public to help police identify his killer.

His twin brother, Pedro Martins, said Durval Martins had been walking home from the bars on 17th Street near Dupont Circle in a break from his normal routine of taking a cab home.
“It’s been a very hard time for my family and myself,” he said Thursday at a news conference that his family called to seek out possible witnesses to the crime.

“I feel like part of my heart has died,” he said. “I have faith in the police that they’re going to find these monsters that did this.”

Pedro Martins and Durval Martin’s mother, sister, and niece, along with other relatives, wept inconsolably while standing before a gray metal light pole on which a photo of Durval Martins had been taped. Lit candles were at the base of the pole, and hand-written messages expressing love for Durval Martins were taped to the pole.

Police said an officer on patrol about a block away from the site of the shooting heard the gunshots and saw two young men running north on 11th Street. The officer rushed to the scene after calling paramedics and discovered that Martins had his wallet in his hand, as he lay unconscious on the street, according to an account by police.

“That fact that nothing was taken from him makes me question robbery as a motive at all,” said Chris Farris, co-chair of the local group Gays & Lesbians Opposing Violence. "

UPDATE: I photographed Mr. Martins' shrine site again on Christmas Day, 2009. His family and friends have been keeping it fresh and well-tended. 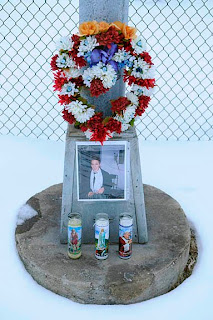 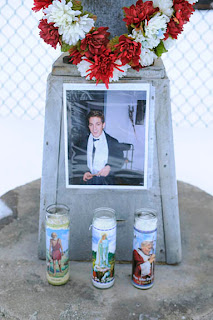 What is going on with this case? Has anyone come forward, any leads?
So sad, I knew Durval as a child and will never forget his upbeat attitude.