Street memorial in the 1600 block of U Street SE, DC

There has been a lot of violence in this neighborhood of late. This shrine is likely in memory and honor of Shawntese Murphy, slain here in October 2017.

May she, and her community, know peace.

From a DC Police report: Detectives from the Metropolitan Police Department’s Homicide Branch are investigating a fatal shooting that occurred in the 1600 block of U Street SE, Washington DC, on Friday, October 20, 2017. At approximately 10:53 pm, members of the Seventh District responded to the listed location for the report of a shooting. Upon arrival, officers located an adult female,  identified as Shawntese Murphy, 20, of Suitland, MD, suffering from a gunshot wound. DC Fire and Emergency Medical Services responded to the scene and found no signs consistent with life. During the course of the investigation, a second victim, an adult male, was located at a local hospital receiving treatment of non-life threatening injuries. 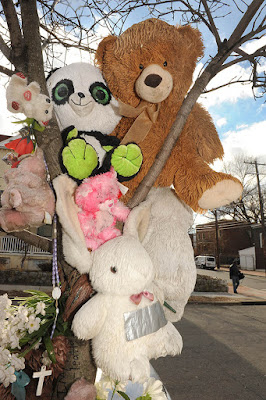 On August 3, 2006, Robert Lee Vinson was also shot to death in the same block. More information on this situation is on the DC Police website, here.