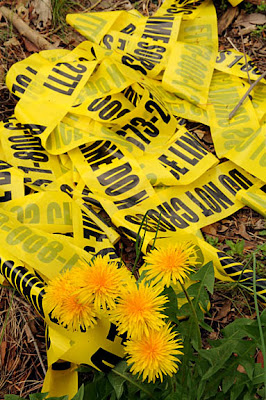 From a DC police report on HomicideWatch: On Friday, April 12, 2013, at approximately 10:18 pm, units from the Sixth District responded to the 5800 block of Southern Avenue SE, Washington DC, for the report of a shooting. Upon arrival, they located an adult male suffering from multiple gunshot wounds. DC Fire and EMS responded and did not find any signs consistent with life. The decedent, identified as Mikal Alexandar Hudnall, 24, was transported to the Office of the Chief Medical Examiner for the District of Columbia, pending an autopsy.

There have been several fatal shootings in this area over the last few years.

I found this mass of police crimes scene tape alongside newly blooming dandelions. 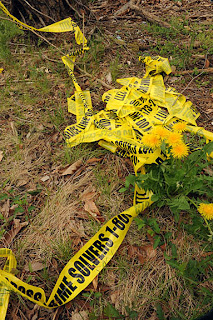