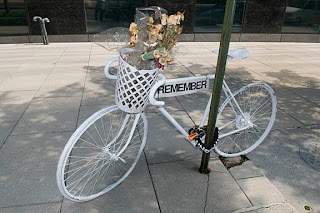 Ghostbike at the corner of 12th Street and New York Avenue NW, Washington, DC. It was placed by the Washington Area Bicycle Association in memory of cyclist Constance Holden, 68, who was killed in a collision with a truck April 13, 2010.

From: http://washcycle.typepad.com/.a/6a00d8345198c369e201347fdc210e970c-popup
and the Washington Post.
The cyclist killed in Monday's deadly crash with a military truck was identified yesterday as Constance Holden, a writer and an artist. She was a frequent bike commuter.

All day long, beneath the windows of her building, motorcades of black sport-utility vehicles carrying presidents and prime ministers to and from a nuclear summit had been passing on New York Avenue, escorted by police cars and motorcycles with lights flashing and sirens screaming. City dump trucks and military vehicles had been used all day to block intersections against suicide bombers.

Two DC National Guard trucks were being rolled into position by a guide wearing a yellow reflective vest. A witness said Holden heeded a warning to step back toward the curb.

The second truck hit her.

Four people, one in military uniform, a traffic control officer, and two civilians, rushed to her side and called for help.

A DC police spokesman said it has not been determined whether the driver or Holden was at fault.

The Washington Area Bicyclist Association placed a white "ghost bike" near where Holden was killed.
Posted by Lloyd at 2:45 PM