Shrines to Officer Stephen T. Johns, at the US Holocaust Memorial Museum 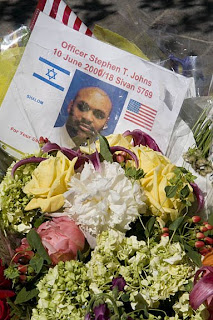 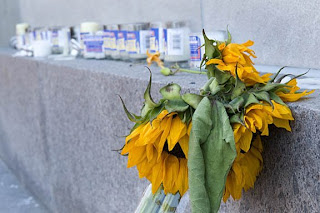 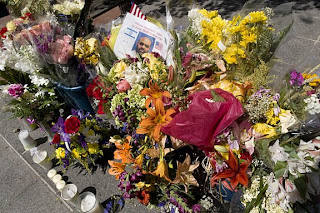 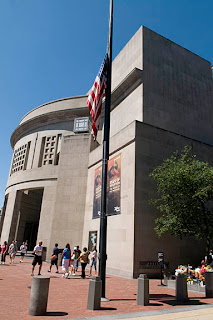 Three shrines have been created to honor Stephen T. Johns, the security guard at the United States Holocaust Memorial in Washington DC, who was killed June 10, 2009. According to authorities, white supremacist and anti-semite James W. Von Brunn, 88, entered the Holocaust Museum and immediately shot Mr. Johns. Von Brunn then was himself shot and critically wounded by two other quick-acting guards. Von Brunn maintained a virulent racist website, and had a life-long history of involvement with hate groups. A notebook with anti-semitic writings that were also critical of President Obama was found in his car.

Johns, who is being referred to in the press as a "gentle giant" - he was 6' 6' - leaves an eleven-year old son. Von Brunn's crimes and motives have been universally denounced, including by both his own son & by the President.

Officer Johns is being hailed as a hero. The flags at the museum are being flown at half-mast in his honor.

The Holocaust Museum has established a special fund for the benefit of Officer Johns' family.Make checks payable to "USHMM Officer Johns Family Fund" and mail them to: USHMM, 100 Raoul Wallenberg Place, SW, Washington DC 20024. You may also contribute by calling toll free 877-91USHMM (877-918-7466).

These images are my way of saying Kaddish, and of leaving stones. May his soul and his family know blessings and serenity.