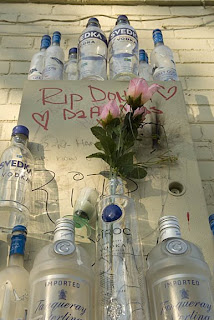 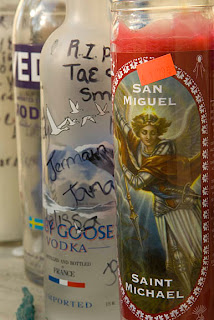 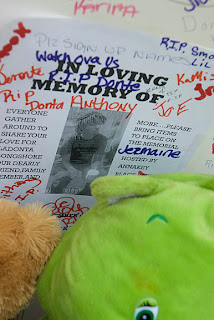 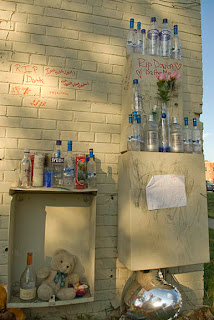 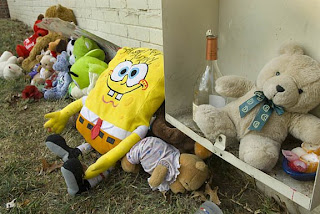 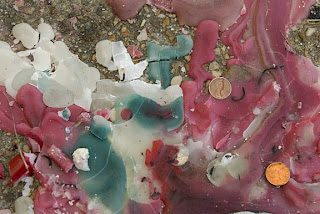 This unusual and heartfelt memorial is erected near the spot where LaDonta, aka Donta, Longshore was murdered this week.

from the Washington Post, Metro section, p. C3, November 9, 2008:
"... DC Police said LaDonta Longshore, a 9th grader at Dunbar High School was one of the youngest people killed in the city this year... he was found about 10:30 PM Monday [11/3/08] behind his apartment building in the 1200 block of Brentwood Rd NE... He died Wed. [11-5-08] in a hospital. The shooting is under investigation. Relatives said the teenager was popular, friendly, & fond of music & electronic games... His mother, Crystal Longshore, said she had 'no understanding' of why he was shot' 'None at all.'"
He played with a basketball group with the Brookland Union Baptist Church.

The shrine was spread all along a blank wall behind the apartment, with lots of magic-marker grafitti messages added, including the cryptic "Tell Juju wat up. See ya RIP"

Evidence of the candlelight vigil mentioned in the paper was present. I briefly met one of his teen cousins at the site. I may be misreading things, but he seemed primarily interested in the fact that news of the shooting had made the papers.
Posted by Lloyd at 3:24 PM