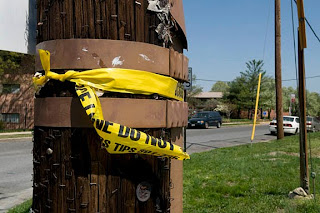 From police and news reports:
March 3, 2010 2:12 am - Two men were found with gunshot wounds in the 3400 block of Dallas Drive, Temple Hills, MD. Both were taken to the hospital, where one man died.
The slain man was Lorenzo Steven Smith, Jr., 35, of the 3900 block of Dent Street, Capitol Heights, MD
A second victim, 33, was also shot and transported to a local hospital, where he is expected to survive. Both victims have extensive criminal backgrounds.

This police tape was at the edge of a bowling alley parking lot.
Posted by Lloyd at 1:40 PM