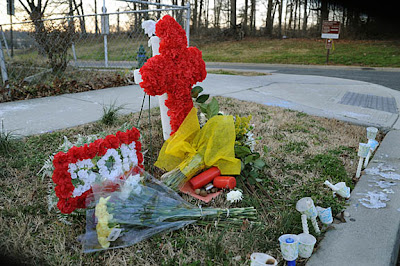 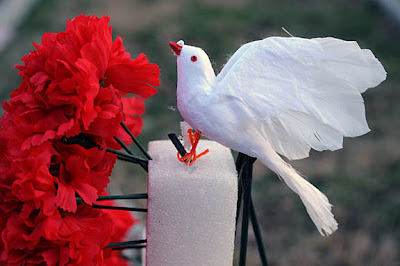 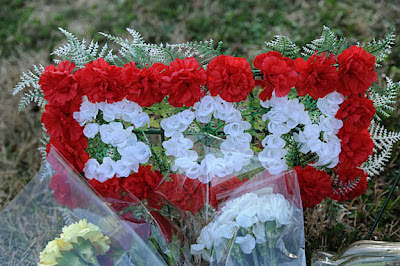 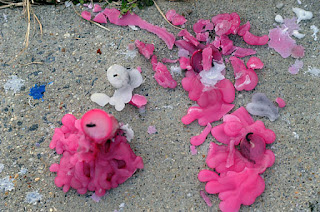 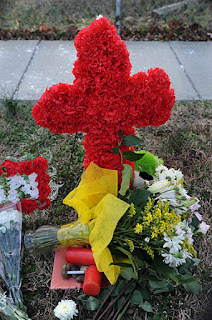 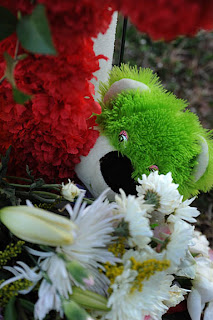 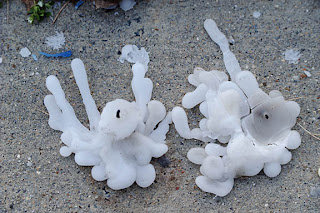 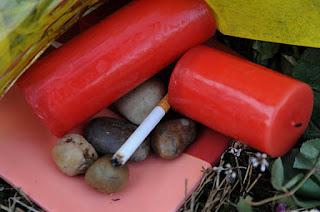 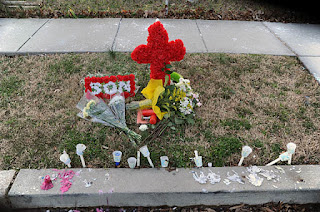 More, including video news links, are at HomicideWatch.
Posted by Lloyd at 11:38 AM 3 comments 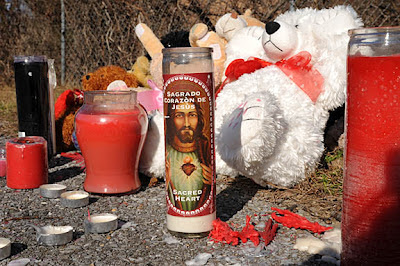 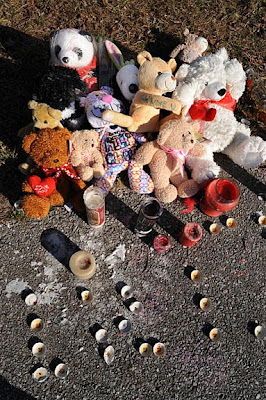 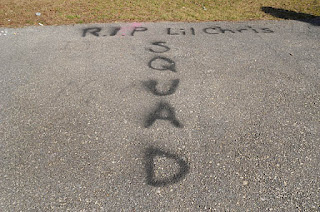 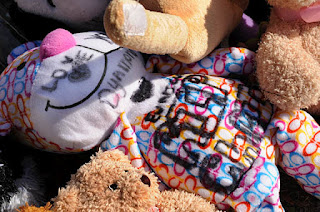 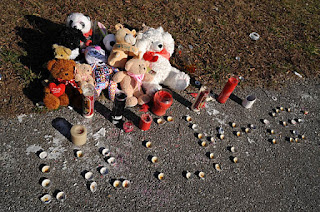 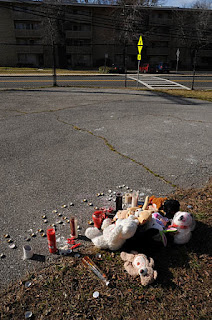 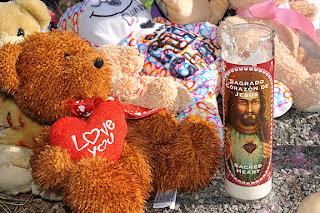 See GoryPG to follow the situation.
Posted by Lloyd at 2:12 PM 0 comments 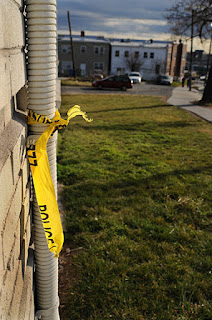 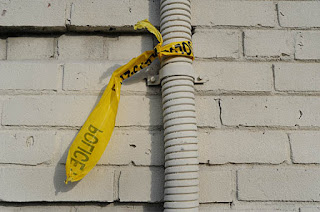 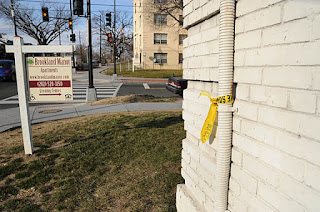 From a DC Police report: On Wednesday, February 15, 2012, at approximately 5:00 pm, units from the Fifth District responded to the 1300 block of Saratoga Avenue NE, Washington DC, for the report of a shooting. Upon their arrival, they located the victim, identified as Lewis Rashad Dixon, 21, suffering from multiple gunshot wounds. DC Fire and EMS transported the victim to an area hospital, where he succumbed to his injuries and was pronounced dead.

It was a beautiful winter afternoon, but I often find these remnants from the police investigations at homicide sites to be quietly mournful, sobering, and poignant.

More information at HomicideWatch.
Posted by Lloyd at 12:55 PM 2 comments 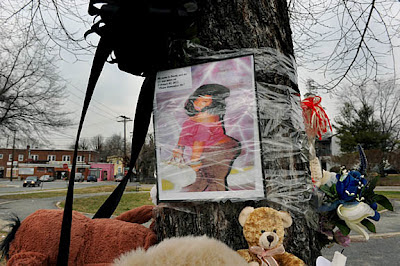 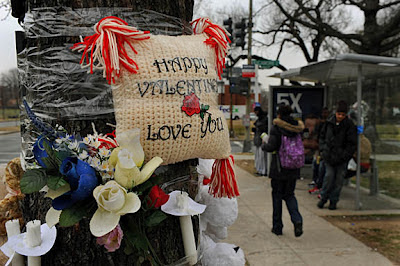 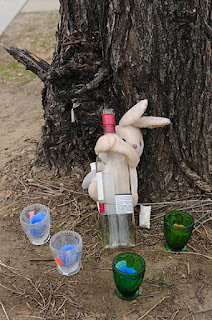 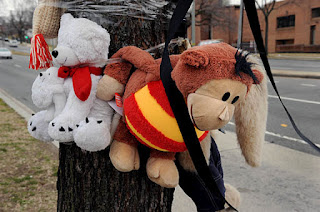 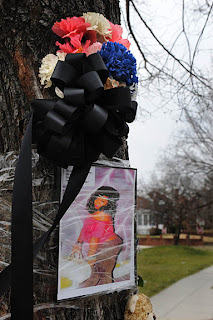 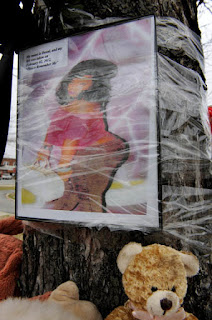 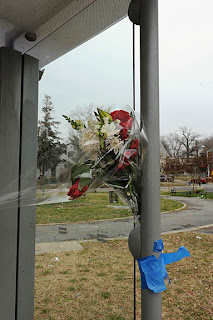 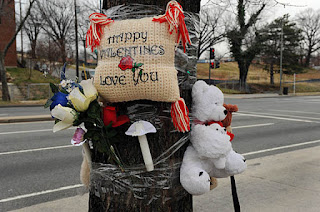 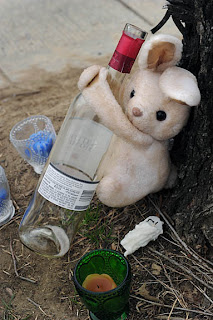 Flowers and tears. May all know peace, and may justice, justice be done.
Posted by Lloyd at 9:50 PM 1 comments 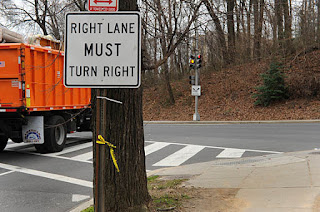 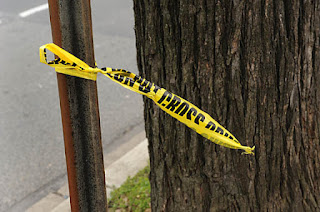 From a DC police report: On Sunday, January 29, 2012, at approximately 2:56 am, units from the Fourth District received several calls for the sounds of gunshots in the 700 block of Otis Place NW, Washington DC. While responding, a MPD cruiser was flagged down at the corner of Georgia Avenue and New Hampshire Avenue, NW, by an unidentified black male who stated that unknown suspects had just shot at him from a burgundy colored Plymouth minivan with Virginia tags. A lookout was broadcast and another MPD unit observed a burgundy minivan speeding in the 300 block of Upshur Street, NW, passing through stop signs without stopping. A pursuit was then initiated and ended in the 400 block of Taylor Street, NE, when the suspect vehicle lost control, struck a tree, and then struck another MPD vehicle that was responding to the scene for support. Personnel from DC Fire and EMS responded at the scene of the crash. The two officers in the vehicle that was struck sustained non-life threatening injuries and were transported to a local hospital. All three occupants of the suspect vehicle were ejected. Two of suspects died of their injuries. The third male suspect, a juvenile, was transported to a local hospital in critical condition. The decedents have been identified as Thaddeus Alphonso Howard, 19, and William Kurland Joseph Adams IV, 18, both of DC. Evidence recovered indicates that the vehicle was involved in a shooting. MPD units returned to the scene where the male flagged them down, but have been unable to locate him.
Posted by Lloyd at 9:43 PM 0 comments