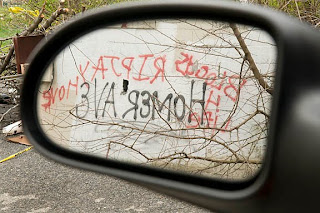 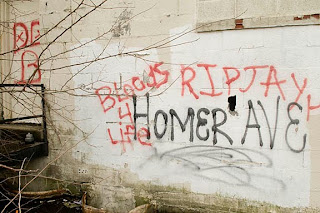 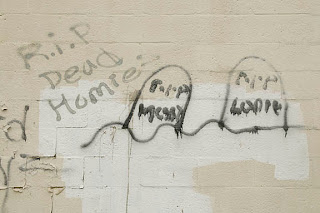 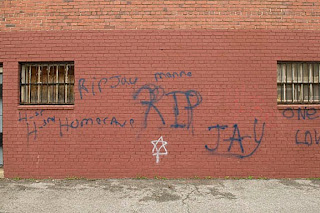 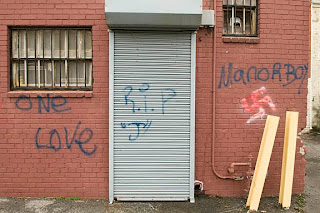 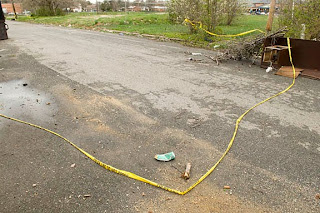 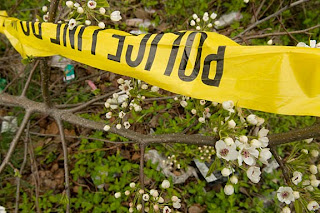 This complex of gang memorial tags and crime tape is behind an older strip mall (near US Census Bureau)in 4600 block Suitland Rd, Suitland MD. I found this graffiti for a Bloods gang- RIP's to Jay, Lil Dre, Trey, & Messey. I could find no other info. The grafitti indicates they are the Homer Avenue Crew.
I was looking for apossible shrine or material for Mr. Samuel Garvin, and discovered this material. The yellow tape is for Mr Garvin I believe. On February 17, 2010 at 11:44 am, Prince George's County police officers responded to the 4600 block of Suitland Road for the report of a shooting. They discovered Samuel Kelly Garvin, 26, of the 3000 block of 9th Street, SE DC suffering from a gunshot wound. He was pronounced dead on the scene.

I have no information on the others mentioned and memorialized in these other markings.

The Star of David and the swastika, and the chaos of the environment... Unusual, and to me, both sad and disquieting.