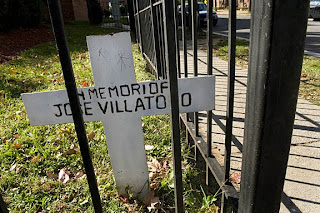 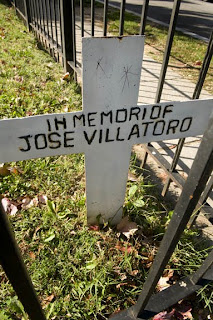 This simple permanent memorial to Jose Villatoro is at the corner of Pomeroy Street and Martin Luther King Avenue SE, Washington, DC, near where he was killed while trimming grass.

From the Washington Post and police sources:
About 11 AM on October 16, 2006, Lankward Harrington was walking to a grocery store in the 2600 block of Martin Luther King Avenue SE in Anacostia when he came upon Jose Villatoro, who was cutting grass at an apartment complex.

Prosecutors said Harrington had spent the previous night smoking PCP, and he was angry. He was angry that after an argument, his father had ordered him out of their apartment. He was angry because he suspected that his girlfriend was cheating on him.

As he approached Villatoro, 35, who was using a line trimmer to edge a lawn, Harrington grew angrier when Villatoro did not pause to allow him to pass. Instead, Villatoro kept working and grass hit Harrington's clothes and hair. Harrington stopped, reached into his backpack, pulled out a .357 magnum and shot Villatoro four times in the face and body before walking away.

"I made sure he saw me and looked me in the eye," Harrington, 25, calmly told a shocked audience in DC Superior Court, the first time anyone had heard a motive in the killing. "I take pride in my appearance. I did not appreciate that."
A stunned Assistant US Attorney Steve Snyder sought clarification from Harrington. "He did nothing to you, did he?" Snyder said.
"He got grass on me," Harrington said quietly. "That was something."
Harrington was charged with second-degree murder in Villatoro's killing. After closing arguments Tuesday, it took the jury less than ten minutes to return a guilty verdict.

This year, after follow-up meetings with Harrington in preparation for the trial, two of the three D.C. area psychologists who last year testified that Harrington was insane changed their diagnoses and said that he was not insane at the time of the shooting.

Mr. Villatoro left behind a family of four in the Mount Pleasant area of DC. he had been the sole provider for them.
Villatoro's wife, Carmela, never flinched as Harrington spoke of shooting her husband and the father of their two daughters, ages ten and five. What did surprise her, she said, was that it took three years for a jury to find Harrington guilty. The Villatoros immigrated to the Mount Pleasant area from El Salvador in 1990. Since then, her husband had worked for landscaping companies.

"Knowing what [Harrington] did, I don't understand why it has taken so long," she said. "How could he do something like this only because of grass?"

Harrington is scheduled to be sentenced December 18, 2009.

Mr. Harrington's father said his son had a history of psychiatric problems. Latino organizations in the city have made support and outreach efforts for the Villatoros family.
Posted by Lloyd at 10:54 PM