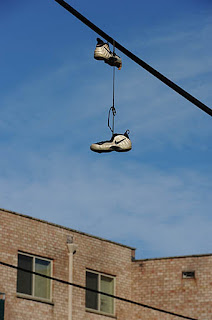 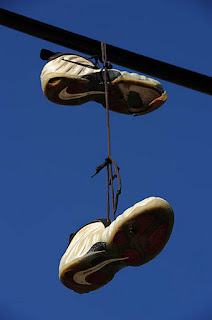 According to the Washington Post, there were two killings in two succesive nights in the same block of Oxon Hill, Maryland.

Kaya Dejuna Wilson, 29, was fatally shot Saturday night November 19, 2011, in Prince George’s County, about one block from where a man was killed in a stabbing Friday evening, authorities said.
A police spokesman said there are no signs that the two incidents were related.

The Saturday night shooting occurred about 8:30 pm in the 1000 block of Marcy Avenue in Oxon Hill. Ms. Wilson was pronounced dead inside her apartment.

The evening before, November 18, 2011, Jakari Butler, 20, was found in the same block on Marcy Avenue after a slashing was reported there around 5:30 pm. He was later pronounced dead at a hospital.

I found no evidence of a memorial for Ms. Wilson in this modest garden apartment complex, and I assume these men's sneakers, tossed over a wire just outside the entrance to the area, are intended as a tribute to Mr. Butler. Seeing them quietly swaying on this sky-blue day made me sad.

There is more information available at GoryPG.
Posted by Lloyd at 4:57 PM

Well We Gonna Say For Him 💪🏽 #RipKari