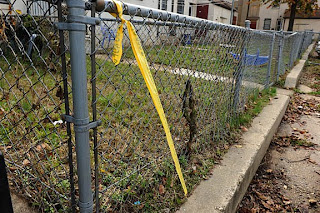 From a DC Police report: On Thursday, October 20, 2011 at approximately 11:02 pm, units from the Seventh District responded to the 1100 block of Eaton Road SE, Washington DC, to investigate the report of an unconscious person. Upon their arrival, they located an unconscious and unresponsive male, Jodie Ward, 30, suffering from a stab wound. DC Fire and EMS determined that the victim had no signs consistent with life and was pronounced dead. On Thursday, October 20, 2011, members of the Homicide Branch arrested Felicia Dianne Jones, 30, originally charging her with Murder II while Armed. The charges against her have since been reduced to Assault with Intent to Kill.

This slaying is one of two that recently occurred in the struggling Barry Farms neighborhood of DC.

More information is at HomicideWatch.
Posted by Lloyd at 3:19 PM