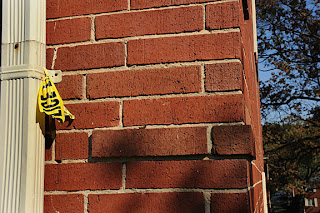 From a Prince George's County police report: On October 25, 2011 at approximately 12:02 a.m., officers from the Mount Rainier Police Department responded to the 4200 block of Kaywood Drive, Mt. Rainier, Maryland, for the report of a shooting. Upon arrival, officers found Alonzo James Guyton suffering from gunshot wounds to his body. Guyton was transported to a local hospital where he was pronounced deceased a short time later.
Through the course of their investigation, homicide detectives developed William Knight, of Washington DC, as a suspect in the case. On October 28, 2011, an arrest warrant was served on Knight at the DC Jail where he was being held on an unrelated charge. Two additional suspects, Lorenzo Carlton, 21 and Michael Jordan, 18, have also been arrested in connection with this murder.

I found this remnant of police crime tape in an otherwise quiet well-kept garden apartment complex.
Posted by Lloyd at 2:57 PM