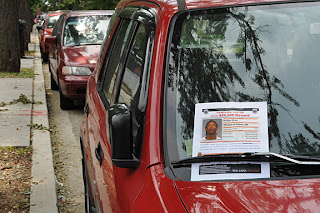 From a DC police report: On Sunday, August 28, 2011, at approximately 7:38 pm, units from the First District responded to the 200 block of N Street NW, Washington DC, for the report of a shooting. Upon their arrival, they discovered an adult male victim suffering from a gunshot wound. DC Fire and EMS transported the victim, Dominic Dixon, 21, to the hospital where he was subsequently pronounced dead. A second adult victim was located in the area of 4th and M Streets NW suffering from multiple gunshot wounds. He was transported to an area hospital for treatment.
From HomicideWatch: “I was at the basketball court on N street across from Dunbar yesterday evening. Not even five minutes after leaving and entering my house, I heard sirens, saw flashing lights and the helicopter above. From what the neighbors are saying, two young people were shot near the basketball court, with one not surviving."