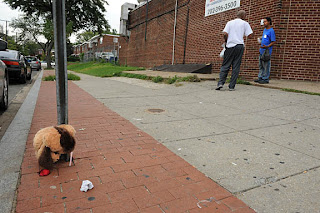 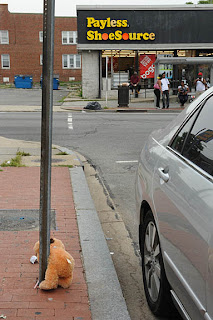 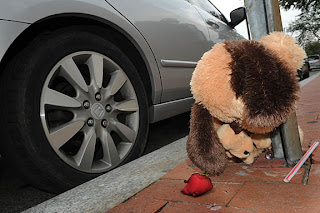 This small memorial to Wyatt Earp Robinson is on a busy corner of Minnesota Avenue NE, next to a seafood store and a MacDonalds.

From a DC Police report: On Sunday, August 21, 2011, at approximately 6:55 pm, units from the Sixth District responded to the 3800 block of Minnesota Avenue NE, Washington DC, to investigate the sounds of gunshots. Upon their arrival, they observed a male lying on the sidewalk, suffering from apparent gunshot wounds. DC Fire and EMS determined that the victim had no signs consistent with life. Subsequently, the victim, Wyatt Earp Robinson, 33, was pronounced dead by a member of the Office of the Chief Medical Examiner.
Ricardo Mitchell, 32, of Temple Hills MD, has been arrested in connection with the shooting death of Wyatt Earp Robinson.

From HomicideWatch: A DC police officer "romantically linked" to Ricardo Mitchell could face criminal charges connected with the murder of Wyatt Earp Robinson, Paul Wagner from MyFoxDC reports. Law enforcement sources say the officer, who is assigned to the Second District, first told investigators she had not witnessed the crime. Then, upon further questioning she changed her story. Admitting she was in the 3900 block of Clay Place NE when detectives say Ricardo Mitchell, 32, shot and killed Wyatt Robinson. The officer, who sources say is a veteran with at least 10 years of service, has had her police powers revoked. She could face obstruction of justice and or accessory after the fact charges.