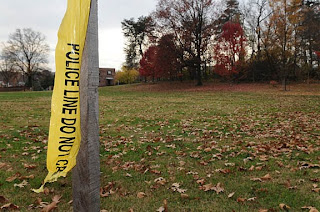 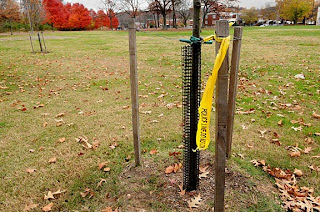 From DC Police reports: On Friday, November 12, 2010, at approximately 3:00 am, units from the Fourth District were dispatched to investigate the report of sounds of gunshots at the intersection of 12th Street and Crittenden Street NE, Washington DC. Upon arrival, a canvas of the surrounding area led the units to the 1100 block of Galloway Street NE, where they discovered the victim. Keith Banks, 29, of the 300 block of Quackenbos Street NW, was unconscious, unresponsive, and found to be suffering from gunshot wounds. DC Fire and EMS transported him to a local area hospital, where he succumbed to his injuries and was pronounced dead.

This murder site is in a lovely park in an area of the city that is generally very safe. I had not been to this neighborhood before while documenting street memorials.