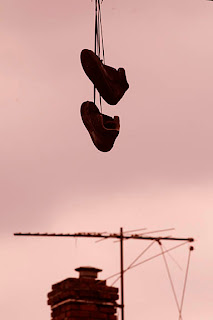 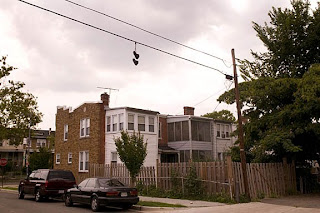 These shoes, a memorial to Nelson Ryan, are in the 1800 block of M Street, NE, Washington, DC.

From a police report:
At approximately 12:50 am on Saturday, July 25, 2009, officers from the Fifth District responded to the 1800 block of M Street, NE, to investigate the report of an assault in progress. Upon arrival, they discovered an adult male lying on the ground suffering from apparent multiple gunshot wounds. The victim was transported by personnel from the DC Fire and Emergency Medical Services Department to an area hospital where he was subsequently pronounced dead.

The victim in this case has been identified as 22-year-old Nelson Ryan of the 600 block of Edgewood Street, NE.

Quiet, secluded neighborhood. Another sad testimony to a young man's life swaying in the summer air above the street.
Posted by Lloyd at 10:12 PM