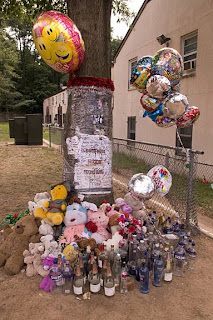 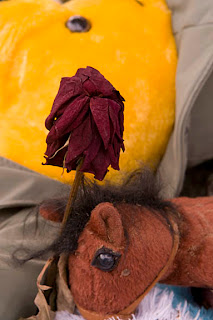 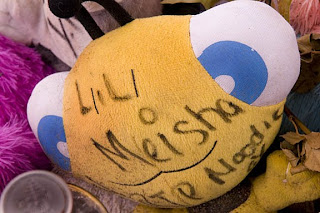 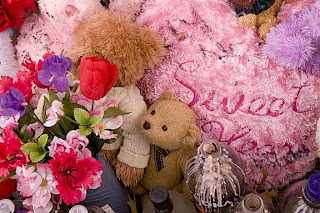 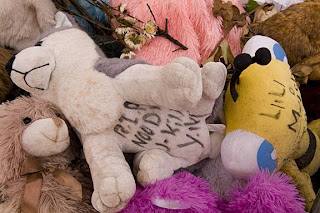 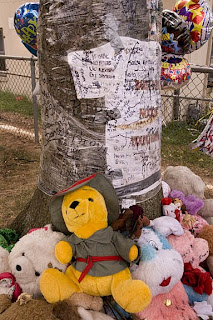 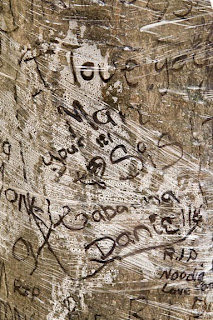 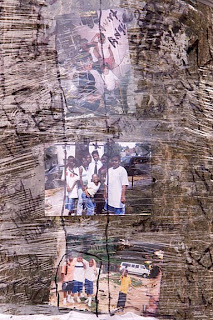 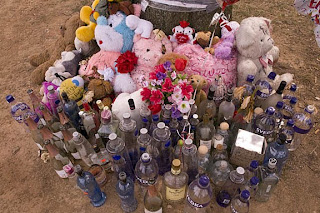 The shrine is in the Barry Farm area, next to his grandmother's house, not at the site of the murder. I spoke to his mother and great aunt. While we were speaking, a man from the neighborhood drank from, and then left, a vodka bottle at the base of the shrine. According to the family, many people attended the memorial service and left offerings in Mr. Short's memory at the shrine they had all built together.

Mr. Short had been a football player at Anacostia High School. He was an organ donor, and parts of his body were transplanted into four people, which his mother said gave her some comfort in the midst of her powerful grief. An award was also created in his memory by a local community group.

From DC police reports:
On Friday, July 24, 2009, at approximately 10:37 pm, members of the 7th District responded to the report of a shooting in the 1100 block of Howard Road SE. Upon arrival, officers located a victim suffering from an apparent gun shot wound.

DC Fire and EMS responded to the scene & transported the victim to a local hospital. The victim was pronounced dead at 12 pm on Sunday, July 26, 2009. The victim was identified as 18-year-old Thomas Short of the unit block of Elmira Street SW.
Posted by Lloyd at 11:22 PM

"♥Rip Noodie I Love YU BayBee Always&Foreva 8.8.90-7.26.09♥"
I neva thought yud be da one too go im still tryna except tha fact yur gonee kuz it waz jus so unexpected yu nevaa did nothin to no bodi i fuckin love yew i can understand why God wud want yu close too him kuz yu truly are an angel ima miss da shidd out yu & seein yu smile yu were so young nd doin sumthing with yur life then sumone jus took yu frum me i will never foregt our memories. but it breake my heart dat i have too look at pictas jus too see yur face. i wuznt ready too say goodbye so im not goin to this is juss a farewell for now till we meet again Ralisa miss yu noodie I love yu

we go back to birney sandbox days....2nd grade and shidd i cant believe u gone shidd is crazy and who did dis will get theres god will see to that....everybody miss you mane Rest In paradise

MANNNNN.. OMg Brothss NEVER in a Million Years Did i think i wouldnt be Blessed with your Smile or Smothering Hugs i Love you so much,, and Until this Day i still cant believe or accept it.. i Sit and wonder WHY is it always the GoodOness.. Noodie you knw that since you passed so many ppl is claiming to know and love you,, But Our love is irreplacable., Your My Brother from another Mother && i Wouldnt change Anything about our Relationship. Not the arguments (But would be right back talkin the same day) Or the Fights,, Your My Brother and i love && Miss You LOTSSSs.. Until the day we become together againnn LOVEEEEEEEEEE YOUUUUUUUUU So Much... My YM/OY Boyyy tht i Love so Muhhhhh iLLYYYYYYYYYYYY...

Brah this Queese . Man since you been gone cuzz a lot of shit been going down but you see that & you still protecting me cause since you been gone I been screaming rip Noodie . You kno I love you cuzz you got shot next to me brah . Yes people I was standing next to Noodie when he died . Brah fuck 26th . The bullet went straight pass my eyes I heard it & saw it . I love you Noodie & imma make it to the top for us brah kno dat real love & real live . It's Neva no noise ova here bitch niggas m3 Murda money moves . One way up young farmerz! Hollywood . What's good ! It's HOMETEAM till I die . OYYYYYYYYYYYYY

Thomas was my nephew. Thank you for this collection of photographs. They bring me peace, so do the comments that shower his memory with so much love.