Shrine to Tyrone McCann - a moment of learning, and perhaps some justice. 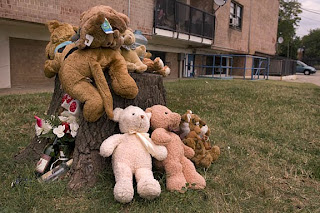 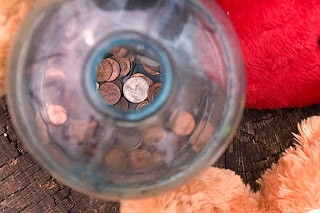 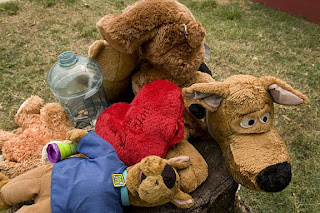 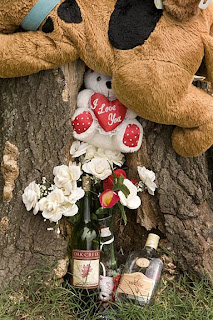 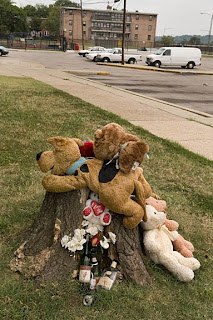 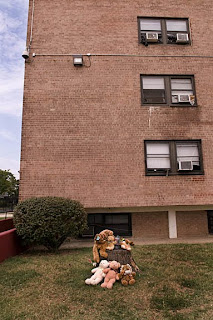 This shrine to Tyrone McCann is at the rear of an apartment complex overlooking the Southeast Freeway, in the 1000 block of 12th Street, SE, Washington DC.

As I approached the site, I observed a father softly admonish his toddler son for removing a teddy bear from the shrine to play with. With quiet guidance, he gently helped the child place the toy bear back on the memorial, instructing the boy that one does not remove objects from shrines.

It is the first shrine which has a collection bottle for money offerings, though I have occasionally seen cash left by mourners as a mark of respect and sacrifice at other memorials.

From DC police reports:
Detectives assigned to the Metropolitan Police Department’s Homicide Branch have announced that an arrest has been made in the homicide of Tyrone McCann, who was assaulted in the 1000 block of 12th Street, SE, Washington DC, on July 7, 2009, and was hospitalized and pronounced dead on July 15, 2009 at 9:30 am. Forty-five-year-old Michael Cabbell of Temple Hills, Maryland was arrested without incident at his home address on Monday, July 27, 2009 at 7:45 am by members of the Capital Area Regional Fugitive Task Force. He has been charged with Manslaughter in the death of Mr. McCann.

On Tuesday, July 7, 2009 at approximately 2:30 am, members of the First District responded to the rear of the 1000 block of 12th Street, SE for the report of an aggravated assault. Upon arrival on the scene they found 30-year-old Tyrone McCann of the 800 block of Alabama Avenue, SE suffering from injuries to his head and face. Investigation into this incident revealed that just prior to the assault Mr. McCann had been involved in a heated verbal altercation with a male suspect known to him.
Posted by Lloyd at 11:49 PM